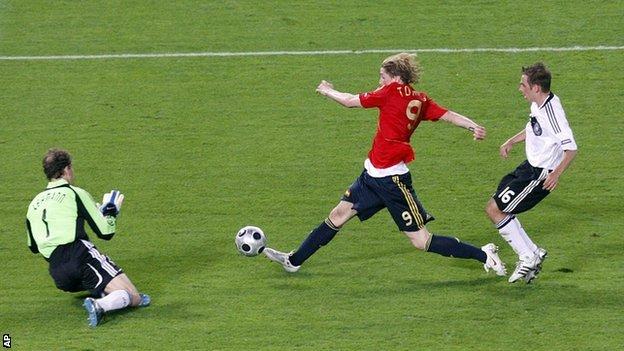 Sevilla striker Alvaro Negredo won the battle to replace record scorer David Villa, who failed to recover from a broken tibia in time.

Manchester United goalkeeper David de Gea misses out but Cesc Fabregas makes it despite being ruled out for just over a week with a hamstring strain.

"Villa is irreplaceable, for his characteristics and effectiveness no one can do better than him," said coach Vicente Del Bosque. "We feel the same with Puyol, who is also a fundamental miss for us.

"In the case of Cesc the doctors are optimistic. We didn't believe there was any chance of not naming him."

He and Negredo will compete for places up front with Torres, who showed glimpses of a return to his best form in helping Chelsea win the Champions League, and Athletic Bilbao's Fernando Llorente.

Roberto Soldado and Adrian Lopez were both overlooked, despite the latter scoring on his debut in the 2-0 win over Serbia on Saturday.

The midfield is dominated by Barcelona with Xavi Hernandez and Andres Iniesta definite starters and Fabregas and Sergio Busquets also included.

In defence, Del Bosque named Atletico Madrid right-back Juanfran in place of the injured Andoni Iraola, who had an outstanding season for Athletic Bilbao.

Spain won all eight of their qualifiers for Euro 2012 and are in Group C for the finals along with Italy, against whom they play their opening game on 10 June, Republic of Ireland and Croatia.