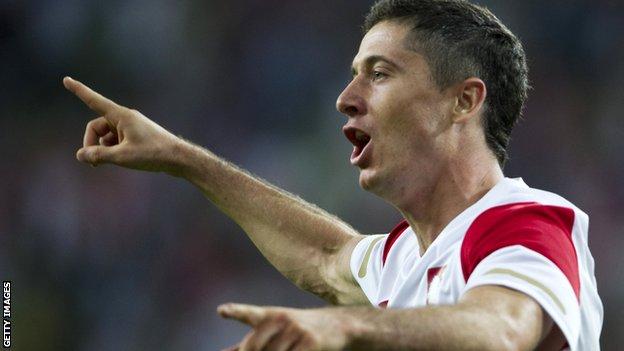 Manager Franciszek Smuda produced no surprises as Tomasz Jodlowiec, Michal Kucharczyk and Kamil Glik were left out from the provisional group of 26.

Number two keeper Lukasz Fabianski - also from Arsenal - was ruled out with a shoulder injury suffered on Saturday.

Lewandowski, who scored 22 goals for German champions Dortmund, will spearhead Poland's attack. He has recently been linked with a possible summer transfer to the Premier League.

Blaszczykowski, 26, who missed Poland's 2008 European Championship campaign because of a hamstring injury, will anchor the midfield.

Smuda admitted he feared more injuries during a 1-0 warm-up friendly win against Slovakia on Saturday.

"I never was so frightened as during yesterday's game. I never felt like that before in my life. I was just thinking please make sure nobody gets injured."

Smuda said he was devasted for the unfortunate Fabianski after the team's medical staff decided it was too risky to include him in the final squad.

"This is a tragedy for him. He was in good form, we saw that in training," he said.

The Poland coach, who took over in 2009 following the sacking of Leo Beenhakker, believes Group A is fairly open and hard to predict: "I think all four teams in the group have a chance, but Russia are the favourites," said Smuda.

Poland are scheduled to play their final friendly on 2 June against Andorra and will face Greece in the opening match of Euro 2012 at Warsaw's newly built National Stadium on 8 June.