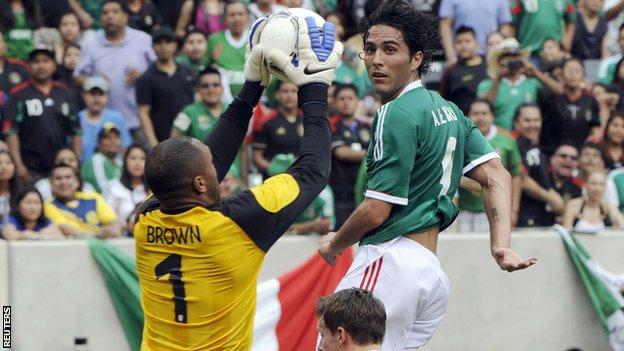 Chris Coleman's first game as Wales manager ended in defeat at the hands of Mexico in the heat of the MetLife Stadium in New Jersey.

Mexico striker Aldo de Nigris was on target at the end of each half as Wales struggled.

The first goal came two minutes before the interval when De Nigris scored with a back-post header followed by a second a minute from time.

Coleman would have hoped for a much better start than this to his reign, but had to watch as stand-in keeper Jason Brown was kept busy, Mexico creating 15 chances in the first half alone.

The new manager had taken a back seat for the Gary Speed memorial match - a 1-0 defeat by Costa Rica in February at the Millennium Stadium - with Osian Roberts leading the side.

For this fixture, Coleman was deprived of the services of midfielders Gareth Bale and Joe Ledley through injury, although he was boosted by the presence of Craig Bellamy, who had appeared set to retire from international duty.

Brown was picked in goal for his first appearance since November 2006, with Wayne Hennessey, Boaz Myhill and Lewis Price all absent from the trip to the United States.

Brown was forced into action as early as the fifth minute when Dos Santos shot from a tight angle.

A free-kick given away by Ashley Williams on the edge of the area caused panic in the Welsh ranks but De Nigris was adjudged offside when going for a header in the six-yard box.

Edgar Andrade fired over in the 18th minute before Brown was called on to make a sharp save from a deflected De Nigris shot.

Wales' first chance of any note came midway through the half but Hal Robson-Kanu was off target with his header after an Adam Matthews throw tested Mexico's defence.

Andrade and Dos Santos both fired wide in the space of two minutes from the edge of the box.

The Mexico goal came just before half-time with De Nigris heading in at the far post after Brown and centre back Chris Gunter hesitated going for a cross from the right.

There was more danger for Wales after the break when Brown was called into action twice, the second time a point-blank save from a Dos Santos header.

Bellamy wasted a rare Wales opening when he fired over from 12 yards after a precise pass from substitute Sam Vokes over the last Mexican defender.

Mexico eventually sealed the win in the 89th minute as De Nigris intelligently chested home from Andrade's whipped delivery from the left.

Wales have one more friendly at home to Bosnia-Hercegovina on 15 August before they begin their World Cup qualifying campaign at home to Belgium on 7 September.