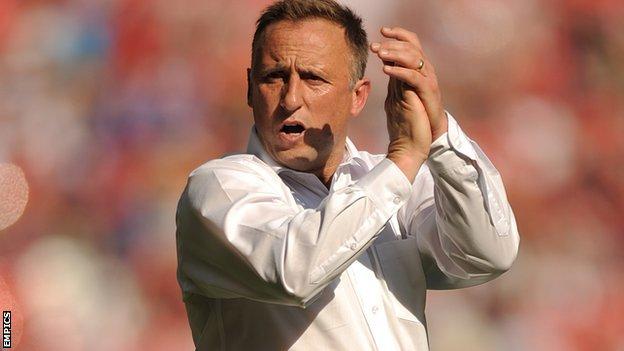 Cheltenham Town manager Mark Yates believes the club will come back stronger next season after their 2-0 play-off final defeat by Crewe.

The Robins finished five points above Crewe at the end of the regular season but fell to the Alex at Wembley.

It means Yates's side are condemned to League Two for a fourth year.

But he told BBC Sport: "Hopefully this is a turning point. I know the chairman will help me get the best possible squad we can. We're a club on the up."

He added: "It's an experience we can build on and be even better next season."

Despite being favourites for the drop after finishing 17th last season, Cheltenham turned out to be one of the surprise packages in League Two this season.

They spent five consecutive months in the automatic promotion places and were top of the table in January.

But their run faltered and, after failing to record a win in March, they fell behind the chase.

A late flurry inform secured them sixth and although they brushed aside Torquay over two legs in the semi-finals, they came unstuck against Steve Davis's Crewe.

But Yates remained defiant, adding: "I'm immensely proud of the group of players.

"We haven't got the biggest budget or the biggest squad but we've competed with some of the big clubs in the division.

"We've played some good quality football at times and apart from a sticky March we'd all be on our holidays and in League One already.

"I've told them I'm proud of them. I don't want to see miserable faces - they don't deserve that and don't need to be like that.

"They've exceeded expectation but today was just one step too far."