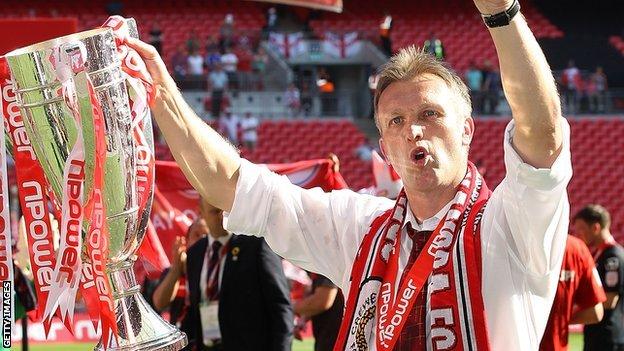 Crewe boss Steve Davis revealed after their that his mandate when taking over in November was avoiding the drop.

The Alex were 18th but went on to lose only four of Davis's 32 games in charge.

He admitted to BBC Sport that he could never have imagined how the season would end: "Not at all.

"When I spoke to the chairman, he just said 'get us out of the bottom six, just get us safe'."

He continued: "If we dropped out of the League the academy could suffer as well so it was important we stayed in the division.

"Then with the results, the confidence grew and the team became better - the players started playing closer to their potential and they've continued with that."

Crewe's last defeat came back in February as they charged their way into the play-offs.

"A 19-game unbeaten run is fantastic for such a young group," Davis said.

Nine of Crewe's 11 starters came through their famous youth academy and Davis, a former Alex defender, accepts some of them could leave this summer,

"Clubs are interested in some of our players, it's a known fact. We'll have to take stock of that and see what happens in the summer," he said.

"We'll try to improve our squad with players that we bring in and hopefully we'll get some better ones.

"Finances don't allow us to bring in players that have played in the Championship or top end of League One so we'll go with the young lads and see how they'll do and try to add two or three qualities players."

But Davis says there is no secret to the academy's success: "It's just hard work - the stuff that we teach the young boys at seven, we teach them when they're young adults. The sessions don't change so they're used to them and can develop through them.

"It's down to the quality of the coaches. We tend to bring back ex-players and they know the Crewe way so they can teach the young players that."