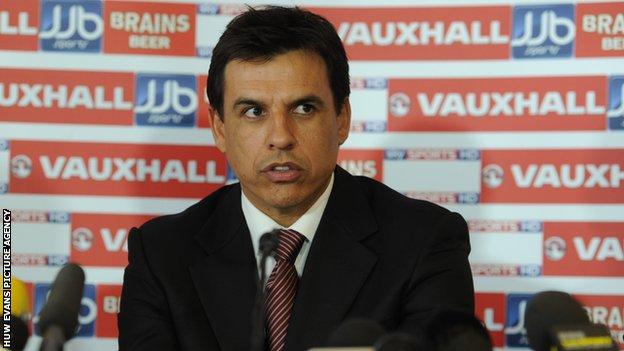 Wales manager Chris Coleman believes defeat to Mexico will ultimately help his side ahead of their qualification bid for the 2014 World Cup.

Wales lost 2-0 on Sunday in the heat of the MetLife Stadium in New Jersey.

But Coleman, in his first offical match in charge, is confident playing against a good Mexican side will be a benefit in the long run.

"The good thing is Belgium are a good team but they will be no better than Mexico," insisted Coleman.

"Mexico are a super outfit and that's one reason why I wanted to play against Mexico.

"It was a tough test. We know in the teams we have got to face in our qualifying group."

Wales open their World Cup qualifying campaign at home to Belgium on 7 September after their final friendly against Bosnia-Hercegovina on 15 August.

"It was a good test for us and we know we have a lot of work to do.

"We have got loads of work to do even if we had won this game and win the next game [against] Bosnia.

"Once Belgium comes round and we start playing for points then that's when we will be proper tested."

Wales were undone in New Jersey by two goals from Aldo de Nigris at the end of each half and struggled against a classy Mexico outfit.

But Coleman was positive about goalkeeper Jason Brown, who played his first international since November 2006 because Wayne Hennessey, Boaz Myhill and Lewis Price were all absent from the trip to the United States.

"He [Brown] has done terrific. He pulled off some great saves, couldn't do much about the goals.

"He was calm and confident and when he was called on to make a save he did that. I was impressed with him.

"Conditions were very difficult. [It was a] sweltering day. They [Mexico] score a lot of goals. They attack very aggressively and make a lot of chances.

"The two goals we conceded which were from crosses which we deal with crosses better than that.

"We worked our socks off. We had to work hard to stay in the game.

"You have to put fatigue into the equation but in terms of effort they gave everything they had."

Asked how many of his players he wanted figuring for the GB football team at London 2012 Coleman responded: "I hope none of them because it has been a long hard season.

"If they have to go with the GB team that's not a lot of rest for them. But that's out of my hands."

Ashley Williams, Joe Allen and Craig Bellamy are all in the frame to play for GB.