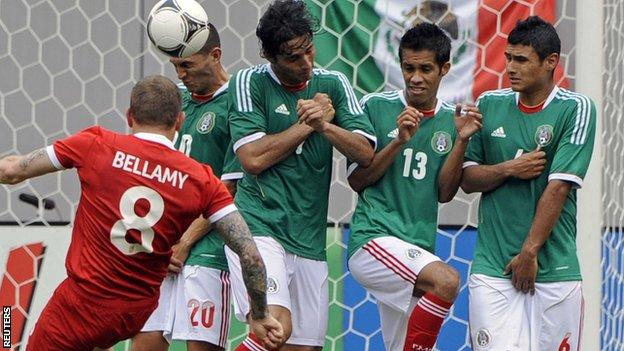 So Chris Coleman's first official game in charge of the Welsh national team ended in a 2-0 defeat to a very good Mexican side, who were far more acclimatised to the hot and humid weather at the MetLife Stadium in New Jersey.

The MetLife, which is situated in East Rutherford, is about 40 minutes from Manhattan and is a very impressive stadium and home to New York Giants and New York Jets American football teams.

When full it holds 82,000 fans, but it was only nearly half full for the third meeting between these two nations.

Nevertheless, it still generated a terrific atmosphere with 99% supporting the Mexican team. A lively, but not a hostile crowd.

Around 300 Wales supporters made the long journey over the Atlantic and showed their appreciation for the players' efforts at the end of the game.

Mexico dominated the first half creating 15 shots on goal and four or five very good chances. It was not a surprise when they eventually scored in the 43rd minute.

After good work down the right hand side by right back Severo Meza, who delightfully lifted the ball to the back post, goalkeeper Jason Brown was beaten and Aldo de Nigris out-jumped Chris Gunter and planted a fair header in the back of the Wales goal.

Not only was the timing of the goal poor - two minutes before the break - but it came after the best period of the half for Wales.

The second half was more of the same with Mexico having the majority of possession and chances on goal. If wasn't for a couple of outstanding saves from Brown - deputising for injured duo Wayne Hennessey and Boaz Myhill - the scoreline would have been much worse.

Coleman made changes in the second half but kept the same 4-3-3 formation. Still, the team failed to ask too many questions of Mexico's back four and goalkeeper Jesus Corona.

Then with two minutes to go, De Nigris broke Welsh resistance with his second goal of the game to secure Mexico's victory.

Once again the goal came from a cross, this time from the left hand side. De Nigris had the freedom of the MetLife Stadium to calmly chest Edgar Andrade's cross past a helpless Brown with Gunter, who had a disappointing game in the heart of the Welsh defence, trying to catch De Nigris offside.

Overall I am sure Coleman will have learnt valuable lessons from this game and will have been delighted Craig Bellamy made the trip to New York and played the full 90 minutes.

However, the former Fulham manager he will be slightly disappointed that six players pulled out of the original squad including Gareth Bale, Joe Ledley, David Vaughan, Jack Collison and Darcy Blake.

Those players would have definitely made a difference had they been available and we all hope that they will be available for the next game in August against Bosnia-Hercegovina.

That will be a crucial game - Wales' last friendly before the World Cup Qualifying campaign begins against Belgium in September.

If Coleman has all these players available for the qualifying campaign, we will do very very well.