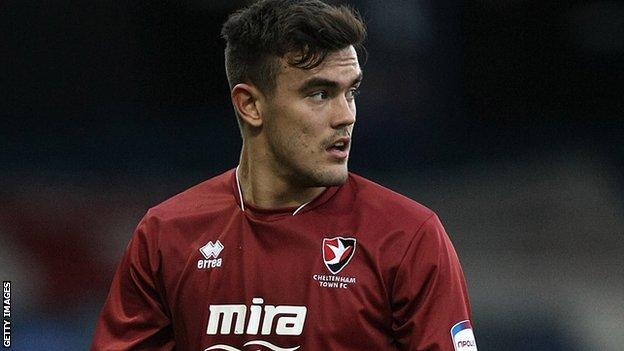 Midfielder Marlon Pack says he is committed to Cheltenham Town despite the side missing out on promotion.

The Robins lost to Crewe in the play-off final on Sunday, meaning they must spend a fourth season in League Two.

Pack, 21, signed a two-year deal at Whaddon Road last season but has caught the eye of other clubs after some impressive performances this term.

"It's gutting to be piped on the last day but I'm fully committed to this club," he told BBC Points West.

"I don't know what's happening next season but I'm under contract and I love it at Cheltenham."

A graduate of the Portsmouth academy, Pack was loaned to the Robins from Pompey for the 2010-11 season.

After this season, the expectation will be higher and there's no reason we can't go one better next season

He made 41 appearances during his loan spell and joined on a permanent deal following his release from Fratton Park last summer.

Pack managed 53 appearances in all competitions this term, scoring seven goals - including a stunning free-kick in the play-off semi-final second leg against Torquay - and was also named in the League Two team of the year.

And he believes staying at Cheltenham will help him develop his game further.

"This season has been a learning curve for me," he added.

"I'm only young and to play in a play-off final was amazing, even though I'm gutted and upset it's experience for the future.

"We'll learn from this and hopefully it will make us more hungry.

"After this season, the expectation will be higher and there's no reason we can't go one better next season."