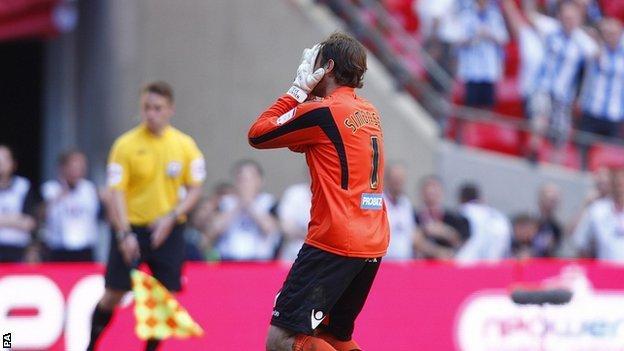 Sheffield United goalkeeper Steve Simonsen says the time since his penalty miss in the play-off final has been "horrendous".

The Blades keeper missed the vital spot-kick to give Huddersfield an 8-7 win on penalties.

"It's been horrendous. Obviously it's the lowest part of my career," he told BBC Radio Sheffield.

"I've replayed it a million times in my head and I just can't bear to watch it at the moment."

He added: "I'm gutted for myself, the club, the fans and my family.

"All the blame doesn't come down on my shoulders but you just feel like it's all your fault right now and I have to live with that."

Simonsen made a number of good saves to keep the scores at 0-0, notably stopping two goal-bound headers from Town skipper Peter Clarke late on in the match.

The 33-year-old is out of contract at Bramall Lane at the end of June and is hopeful of staying with the club.

"I would love to stay at Sheffield United. I've enjoyed my time here so much and after the way things ended on Saturday I personally feel I need to be there to put things right," he continued.

"I don't know when discussions will take place, or if there have been some discussions already. Hopefully the manager and chairman see me being here next season."