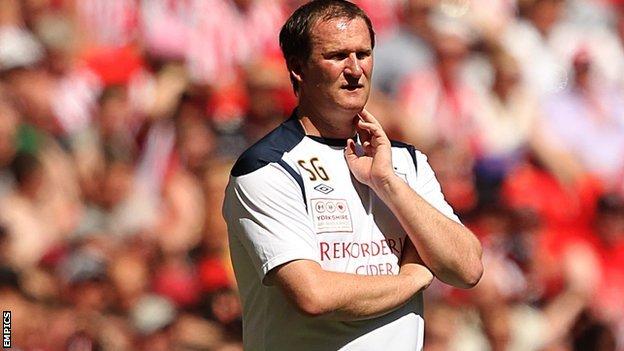 Town secured a return to the Championship after an 11-year absence on Saturday with a penalty shoot-out win over Sheffield United in the League One play-off final.

"Our first aim for next year will be to survive," he told BBC Radio Leeds.

"When you are a promoted team first and foremost you need to focus on staying in that division."

He added: "That doesn't mean to say that we can't go on to have a very good season. We've got an ambitious chairman and we've seen teams go straight through the Championship in recent years."

The Terriers boss is already looking to the 2012/13 campaign and admits that tough decisions will need to be made in the next few days.

"I'll be having meetings all week with the staff and the chairman for next season," he continued.

"The retained list will be sorted by the end of the week and it's not easy after you've seen a group of players promoted to then have to make some ruthless decisions.

"I don't want to put numbers on how many we need to bring in for next season but we do need to strengthen."

Meanwhile, goalkeeper Alex Smithies, who scored the winning penalty on Saturday, was revelling in helping his home-town team to promotion.

The 22-year-old slotted his spot-kick before watching opposite number Steve Simonsen blaze his effort over the crossbar.

"A few of us practised penalties on Friday and I thought it's never going to come to me. I was joking that I'd volunteer to take the 11th," he told BBC Radio Leeds.

"It'll take a long time for this to settle in. I'm born and raised in Huddersfield, my whole family are fans and I live 10 minutes from the ground. I'm over the moon."