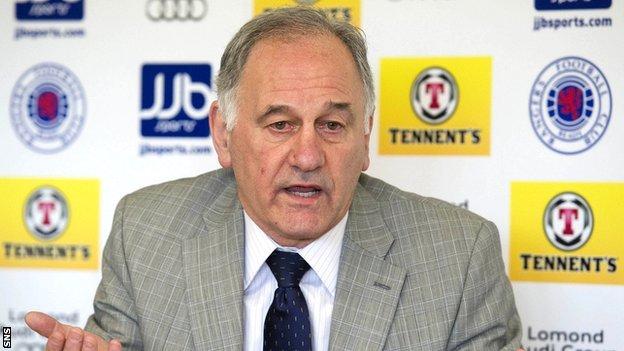 Rangers administrators Duff & Phelps have issued an offer to creditors for a company voluntary arrangement.

The offer was posted on the club's website shortly after 1330 BST on Tuesday.

Creditors have until midday on 13 June to file a claim, which will be followed by a 28-day cooling off period.

Rangers entered administration on 14 February and await the outcome of a First Tier Tax tribunal at the Court of Session in Edinburgh over unpaid taxes - the so-called "Big Tax Case".

The consortium I am leading can only do so much to heal the wounds of the past, but we can do something about the future and that is where our main focus must lie.

A CVA enables companies to reach an agreement with creditors about how debts could be repaid and provides for partial or full repayment depending on what the company can reasonably afford to pay. Often, the alternative is for the company to be liquidated and the creditors may receive nothing.

"Today is an extremely important milestone for Rangers to begin the journey back to where the club belongs," said Green in a statement issued by the club.

"As a leading sporting institution that can hold its head high both on the field and off it.

"I have great sympathy with creditors, particularly small local businesses in the community around Ibrox, who have suffered in the lead up to administration.

"However, I fervently hope that creditors will form the view that the best interests of everyone will be served by Rangers continuing as the successful club it is and recovering as a business in the forthcoming seasons.

"The consortium I am leading can only do so much to heal the wounds of the past, but we can do something about the future and that is where our main focus must lie. I hope creditors will approve this proposal and we can begin the task of rebuilding Rangers in earnest."

The joint administrators believe that the CVA will ensure the continuation of the club "in its current corporate entity providing the maximum opportunity to avoid additional football regulatory sanctions".

Crucially, the CVA document does not list a "pence in the pound" offer to creditors, which is the norm for a proposal of its kind - although BBC Scotland has established that the CVA offers unsecured creditors between 8-9p in the pound in a best case scenario, which does not take into account and potential liability arising from the "Big Tax Case".

Although, the document makes it clear that there is a great deal of uncertainty as to when creditors would know the exact figure they would be offered.

"The final amount available to creditors could be in excess of £25m, depending on the outcome of litigation. The precise amount will not be known for some months," it said.

WHAT IS A CVA?

Duff & Phelps claim the income to cover the CVA will come from £8.5m pledged by Green's consortium, income from litigation, and debts owed to Rangers from player transfers. The club is currently suing the law firm Collyer Bristow, which represented the current Ibrox owner Craig Whyte during his takeover last May.

Whyte's company, The Rangers FC Group Ltd is listed as holding a fixed charge over the club's current assets, but the amount due is unconfirmed.

Green's pledge of £8.5m and the income Rangers claim they are owed would raise the potential CVA pot to just over £10.5m, which would be used to pay the administrators' bill and pay off the creditors.

However, the CVA document makes it clear the money pledged by Green is a loan to be repaid with interest by the end of 2020.

Fees are also due to the Scottish Premier League, the Scottish Football League and the SFA amounting to £37,448.

Among the other amounts listed in the 60-page document include £8,341 to St Andrew's First Aid and £17.28 to the Sports Turf Research Institute. Strathclyde Police is owed £51,882 and £238 is due to Glasgow Taxis Ltd.

The document posted on the Rangers website lists among the club's current assets as Ibrox stadium, the training ground at Murray Park, player contracts, membership of the Scottish Football Association, the company's share in the Scottish Premier League, intellectual property rights, stock, plant and equipment and cash at bank, amounts owed to the club and outstanding player transfer fees.

Three scenarios are presented in the proposal, which include exiting administration via CVA; liquidation; and the formation of a "newco".