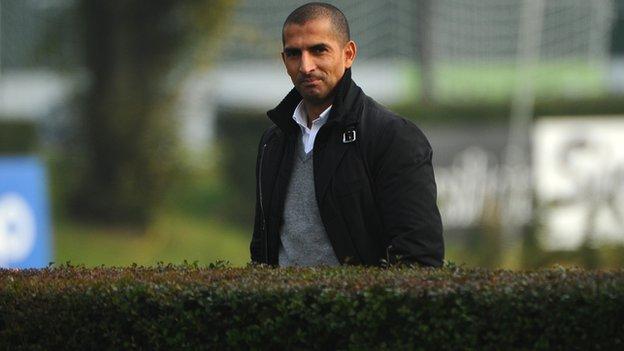 Announced on the Ivorian football federation's website, the move comes less than a week before the start of the 2014 World Cup qualifying campaign.

This is Lamouchi's first senior coaching role and he has just five days before a home tie against Tanzania.

In a statement, the federation thanked Zahoui for his work with the Elephants, whom he led from 2010.

No reason was given for the dismissal of Zahoui, who led his side to this year's Africa Cup of Nations final.

However, the Ivorian coach failed in his bid to win the country's second African title - and first since 1992 - when losing the final on penalties to Zambia.

Zahoui's contract ended after the Nations Cup final in February but ultimately-fruitless negotiations over a new deal had continued afterwards.

After hosting Tanzania in their opening Group C qualifier on Saturday, Ivory Coast's Elephants travel to Morocco for a tricky tie against the Atlas Lions.

The Gambia make up the group, which the Ivorians will hope to top as they seek to qualify for their third World Cup in a row.

Lamouchi, 40, spent most of his club career in France, winning a league and cup double with Auxerre in 1996 before taking the French title again with Monaco in 2000.

A move to Italy swiftly followed, with the midfielder winning the Italian Cup with Parma in 2002 before joining Inter Milan for a largely-forgettable spell a year later.

He made his France debut early in 1996 and played in the semi-final of that year's European Championships, a match which the French lost on penalties to the Czech Republic.

Following June's World Cup qualifiers, Lamouchi will turn his attention to the decisive qualifiers for the 2013 Nations Cup, which the Ivorians will contest in September and October.