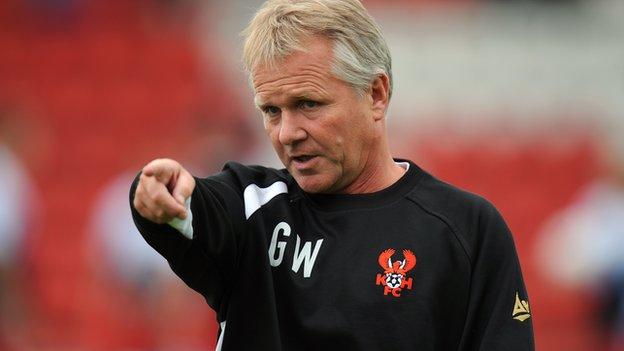 Kidderminster Harriers assistant manager Gary Whild is confident that the core of last season's squad can be kept together as they plan for another Blue Square Bet Premier promotion bid.

Harriers are still in talks with a number of out-of-contract players.

But Whild says they are not expecting to have to make wholesale changes.

"We're hoping that very soon we will have 15 or 16 lads tied down for next season," the Harriers number two told BBC Hereford & Worcester.

"On the back of that, we would then be looking to pick up around four players to make up the squad.

We always know people are going to look at Kidderminster players. They know the wages they are on are going to be relatively low compared to other clubs in this division

"Those four will hopefully add to what is already here - maybe players with a bit more experience."

Whild is aware that their achievement in finishing sixth for a second successive season may prove something of a double-edged sword.

While the club's younger players will clearly be better for the experience of a season at this level, there is also the danger that they could be targeted by rival clubs.

"We always know people are going to be looking at Kidderminster's players," he added. "They know the wages they are on are going to be relatively low compared to other clubs in this division.

"If you are at Kidderminster or you are coming to sign for Kidderminster then it is not a life-changing amount of money on your wages.

"At this level, with the players you are talking to, we would prefer to speak to them face to face.

"That has worked well for us but there are a lot of agents out there that do like to be involved."