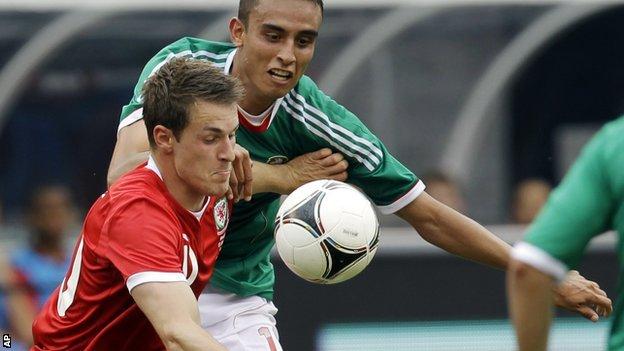 Captain Aaron Ramsey insists Wales are moving in the right direction despite their 2-0 defeat to Mexico.

The result condemned Chris Coleman to defeat in his first game in charge after he took a background role for February's Gary Speed memorial match against Costa Rica.

Ramsey remains confident Wales will be a force to be reckoned with when World Cup qualifying starts in September.

"Everything is still going in the right direction under Chris," he said.

"Obviously, we will have to bounce back from this pretty quickly in the next camp but I'm sure we will do so.

"We can take some positives, but there's a lot more that this team can do because we have shown over the last year what we are capable of doing."

Goals late in each half from striker Aldo De Nigris gave Mexico victory in New Jersey on a day when Wales struggled with the heat and humidity.

Wales did not force Mexico goalkeeper Jesus Corona to make a single save during the 90 minutes, while opposite number Jason Brown produced a series of crucial saves.

The MetLife Stadium was less than half full for the friendly with the large majority of the 35,000 in attendance being Mexico fans.

Wales will face difficult trips to Croatia and Serbia during the upcoming World Cup qualifying campaign, which begins against Belgium in September.

And Arsenal midfielder Ramsey believes the experience of being in front of a partisan crowd will help his side when it comes to those competitive fixtures.

"The experience of the heat and the atmosphere of the home fans will help us when we go to places like Croatia and Serbia in the qualifiers," he said.

"Now we will be more used to that and we realise that we will have to keep hold of the ball much better in periods of the game and get a breather that way.

"We didn't manage to do that. We ultimately paid the price and we were tired by the end."