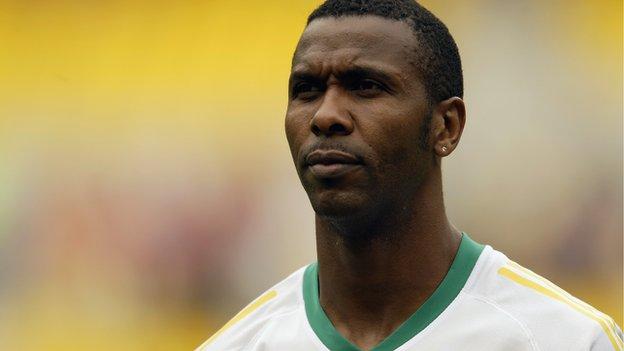 South Africa will stage the 2013 Africa Cup of Nations, having failed to qualify for the last two tournaments.

"This is the time where we should be getting results and where our players should be at another level," Radebe told BBC Sport.

At the moment our football is in turmoil

"It's a time where we should be achieving - especially after we hosted the World Cup.

"It's a very crucial time for us, especially for the manager himself."

Pressure is mounting on coach Pitso Mosimane, who took charge after the 2010 World Cup, following eight months without a win.

The run includes the embarrassing Nations Cup qualifying draw at home to Sierra Leone in October, when Mosimane played for a point in the mistaken belief that this would qualify his side for the finals.

In the end, Niger qualified for the 2012 Nations Cup from South Africa's group.

"At the moment our football is in turmoil, there's a lot of speculation and criticism left and right," said Radebe.

"But what Pitso can do is instil confidence and self-belief into the players, because with the Nations Cup coming up I think that the fans and all of South Africa need to be convinced that we've got a team that can compete at the highest level, especially the 2014 World Cup."

After playing Ethiopia in Rustenburg on Sunday, South Africa continue their Group A campaign when travelling to Botswana on the weekend of 9-10 June - with Central African Republic the fourth team in the group.

Bafana Bafana, who played out a goalless draw at home to Senegal in their last friendly in February, won many admirers when the country staged the 2010 World Cup as the lowest-ranked hosts ever.

Despite an indifferent run-up to the tournament, they managed to beat France and draw with Mexico before becoming the first World Cup host to fail to make the second round of matches.

But Radebe believes that it is now time to shake off the tag of a team that is still developing at international level.

"We can't always lay on those laurels where we keep saying that we're still learning or we're still improving," he said.

Radebe was part of the Bafana Bafana that won the Nations Cup in 1996, which is when the country last hosted the finals.

The former defender also captained his nation as it made its World Cup debut in 1998, just as he did on Bafana Bafana's second World Cup appearance four years later.

South Africa have failed to qualify for a World Cup since the 2002 edition, since they contested the 2010 finals in their capacity as hosts, and they last played a Nations Cup finals in 2008.