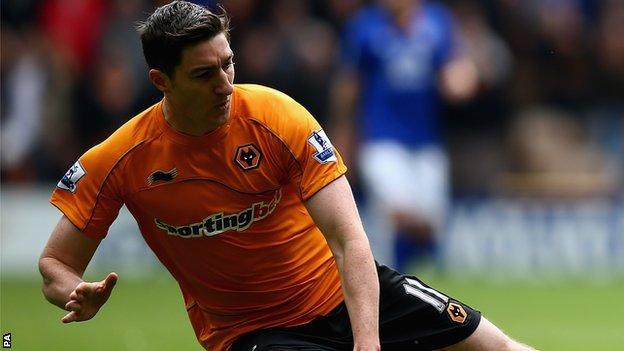 Wolves defender Stephen Ward admits that the appointment of Norwegian Stale Solbakken as manager at Molineux could be the "freshening up" that the relegated Premier League club need.

The Republic of Ireland international defender is yet to meet his new boss as he is away on Euro 2012 duty.

But, on the day Solbakken sits down to talk with his backroom team, Ward is already sold on the appointment.

"It's probably what we needed. It did need freshening up," he told BBC WM.

"Getting relegated was a big wake-up call for a lot of people at the club.

"When Mick McCarthy departed, it was more the timing that shocked everybody. That's why the latter part of the season was really tough for us all.

"But there's no better way of freshening things up than bringing in somebody from a different culture and a different background.

"He'll want his own style, to do things in his own way."

After seeing out their final winless three months in the Premier League under Terry Connor, McCarthy's short-term successor, it was always expected that there would be a new name on the manager's door come the start of next season in August back in the Championship.

But it still took the dressing room by surprise three weeks ago when Solbakken was unveiled.

"It was a bit of a shock to the lads really," added Ward. "There were other names mentioned, younger managers in and around the leagues looking for a bigger job. And I didn't know a whole lot about him.

"But, looking at his CV and after hearing what he said to the lads, it looks a good appointment.

"He's got vast experience and done really well at clubs he's been at and he's managed in the Champions League.

"The lads had a brief meeting with him and were really positive about the things he said."

Although the players are now away for the summer, Solbakken is back at Wolves' training ground this week for the first time since his appointment, to outline a few plans to his backroom staff.

That chiefly involves the shaping of his squad for next season, which still involves a query over the future of 36-year-old defender Jody Craddock, who has been invited back for pre-season training.

The club's longest-serving player, signed by Dave Jones in 2003, has not played since early December against his old club Sunderland - Wolves' last home win - because of a hamstring injury.