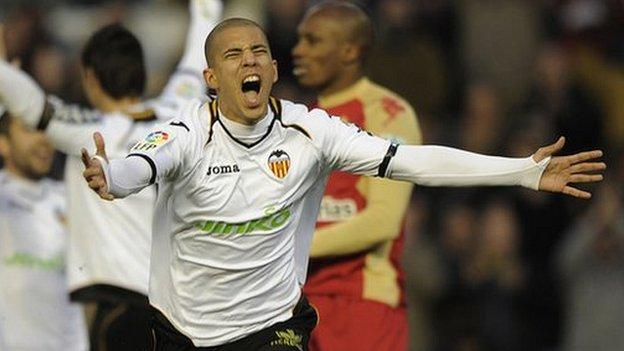 After Barcelona won the Copa del Rey on Friday, everything in La Liga was wrapped up save for a decision about who has been the best African player.

Unlike many other European countries, Spain doesn't have any sort of official poll to decide such an honour.

However, debates in barrios where the African diaspora live - there are around a million legal African immigrants currently living in Spain - has narrowed the shortlist for this informal honour down to two men: Sofiane Feghouli and Arouna Kone.

Algerian midfielder Feghouli, 22, plays for Valencia while Ivorian striker Kone, 28, is on the books of Levante.

Feghouli, a former French youth international who scored on his Algeria debut in an Africa Cup of Nations qualifying win over Gambia in February, was instrumental in his club finishing third in La Liga behind Barcelona and champions Real Madrid.

His six goals and dazzling play down the flank in his second season at Valencia earned him regular standing ovations from the fans.

"I arrived in Spain (in 2010) and found myself in the middle of a pack of internationals. I quickly understood that I had to prove myself immediately," reflected Feghouli recently.

"Initially, I did not figure in his (coach Unai Emery's) plans but then he gave me some playing time and it went well. This season, I have got much more mature and gained speed and power."

Feghouli's only disappointment was Valencia going out of the Europa League at the semi-final stage to another Spanish side, eventual winners Atletico Madrid.

"I would have loved to have won the Europa League because in the end, what matters most are the trophies."

By contrast, Kone's 17 goals in La Liga helped Levante to an unprecedented sixth place and Valencia's modest local rivals will play in Europe for the first time ever next season.

On loan from Sevilla where his contract ended this year, he emphatically resurrected his career after an often-miserable four years with the Andalusians to become La Liga's top African scorer by a large margin.

"With this team, we've done something great this year," reflected Kone.

"Levante and Arouna Kone have reached an agreement for the player to be in their squad for the 2012-13 season," added Kone, via his website, last week.

However, questions over his future still remain with suggestions that the cash-strapped club is keen to capitalise on its new asset, especially with Kone having repeatedly said he wants Champions League football.

Many of Africa's old guard in Spain - such as Frederic Kanoute, Ikechukwu and Kalu Uche and Barcelona's Seydou Keita - have looked a shadow of their former selves this season.

But several other new names have emerged to suggest they can replace them.

Senegalese striker Ibrahima Balde has had a very successful first season at Osasuna, following his move from Atletico Madrid, and Morocco's Abdelaziz Barrada has been an impressive influence in Getafe's midfield.

Both men could easily end up being talked about as La Liga's unofficial 'African Player of the Year' this time next year.

The pair, who will both be 23 at the time of the Olympics, also contributed enormously to their respective countries booking their ticket to London and are looking to show off their skills in front of a global audience there.