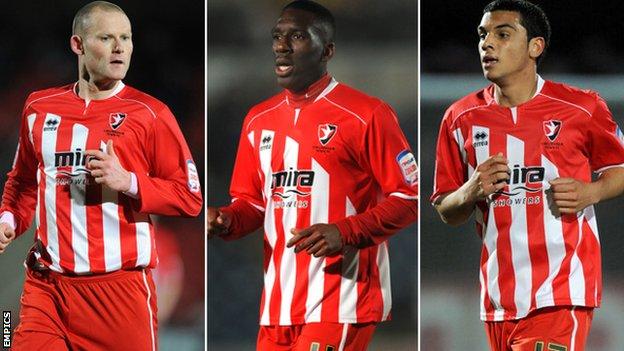 Left-back Danny Andrew has been on the transfer list as boss Mark Yates looks to reshape his squad after their unsuccessful play-off campaign.

Eight players who were out of contract this summer have been offered new deals at Whaddon Road.

"We want to keep the nucleus of the side and I feel for the ones that we've had to part ways with," Yates told BBC Radio Gloucestershire.

"We've got to keep trying to take the club forward, keep improving the squad, and they can consider themselves very unfortunate, but they go with our best wishes and the best luck for the future."

Goalkeeper Scott Brown, who starred in the Robins' League Two play-off semi-final second leg at Torquay, has been offered a new deal.

"I'm sure a number of those players I've offered contracts to will be of interest to other people," Yates said.

"But they know how we do things, and hopefully they'll all sign."

Low is the most experienced player to be released, having joined the club in 2008.

Since then the 33-year-old former former Bristol Rovers, Peterborough and Cardiff City winger has made 133 appearances for the club, scoring 16 goals.

Smikle, 26, was Mark Yates' first summer signing in 2010 when he joined from Kidderminster Harriers and has made 93 appearances, scoring six times.

Academy product Lewis, 20, was given a professional contract in 2010 and went on to play 43 times for the club.

But he only managed three appearances last season, two of which were in the Johnstone's Paints Trophy.