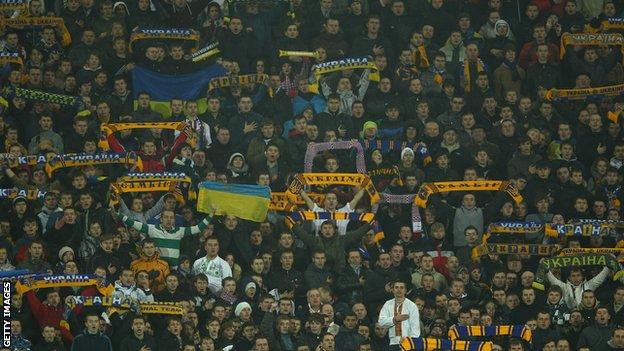 Euro 2012 co-hosts Ukraine has hit back after former England defender Sol Campbell warned fans not to travel to the tournament next month.

In a BBC Panorama programme, Campbell advised supporters to stay at home because of the threat of racism and violence.

"We are getting ready for the great football festival," Lubkivsky said.

"To be honest, from the Uefa point of view, I don't see any dangers for citizens of different nationalities to stay in Ukraine."

Nazi symbols can be seen at ... any match in England, but does it mean that fans should not come to London for the Olympics?

The BBC documentary investigated violence and racism at football matches in Ukraine and Poland.

Theo Walcott's family have revealed they will not be travelling to the tournament because of their concerns about racism.

And Campbell believes Uefa should not have chosen the countries as hosts of such a prestigious event in the first place.

"I think that they were wrong, because what they should say is that 'if you want this tournament, you sort your problems out'," said the former Arsenal and Tottenham player.

But Lubkivsky said visiting fans to Ukraine had nothing to worry about.

He said: "If the player Campbell has such a vision, than it is his own point of view, and it can not be projected for the whole country.

"His statement is simply insolent for us and we do not understand the aim of it."

Former Chelsea striker Andriy Shevchenko says there is "no real problem" with racism in Ukraine.

And Ukrainian Foreign Ministry spokesman Oleg Voloshyn said fans had nothing to fear.

"Nazi symbols can be seen at ... any match in England, but does it mean that fans should not come to London for the Olympics?," he said.