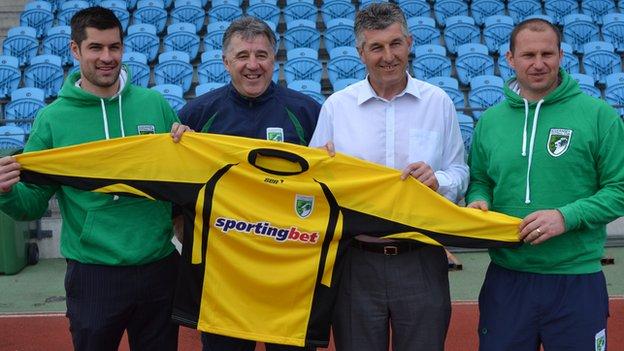 Hamon, who played 13 times for Guernsey, will work with Chris Tardif and next season.

"He has a wealth of experience and will add a great deal to the squad, not only in the goalkeeping department, but in others areas as well," said Guernsey FC manager Tony Vance.

Guernsey won promotion in their first year in an English league last season.

And after topping the Combined Counties League Division One, Vance says an extra coach is needed for the rigours of the league's Premier Division.

"It's the ideal time for us to increase our staff with the additional challenges and commitments that we'll face next season and beyond.'

"I've been a big fan of Guernsey FC and what it brings to local football," said former Vale Rec manager Hamon.

"When Tony offered me the chance to get involved it didn't take me long to accept.

"There are lots of talented goalkeepers on the island and they will all want to be first choice for GFC.

"Chris Tardif and Paul De Garis are the current number one and two and I'll relish the chance to work with them on a regular basis."

Current Guernsey FC first choice goalkeeper Tardif, who is a former Portsmouth and Oxford United stopper, says Hamon was a big inspiration for him as a youngster.

"He was one of the big reasons why I wanted to be a goalkeeper and why I turned professional.

"Chris is a man I have huge respect for and it's an honour to work with him again.

"We share the same beliefs and ideas in goalkeeping and we're going to work well together."