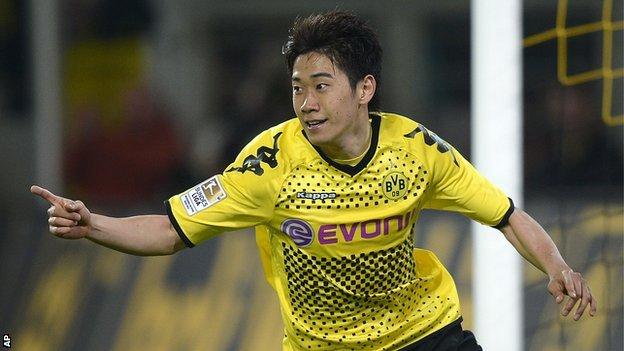 Manchester United have agreed a deal reported to be worth an initial £12m to sign Japan midfielder Shinji Kagawa from German side Borussia Dortmund.

The 23-year-old needs to pass a medical and obtain a UK work permit, but the Old Trafford club expect both to be completed by the end of June.

It is thought the fee could reach £17m depending on success and appearances.

Kagawa scored 13 goals in 31 Bundesliga games as Dortmund won a league and cup double in the 2011-12 season.

Currently on international duty, he played in Japan's 3-0 World Cup qualifying round victory over Oman at the weekend.

His arrival is likely to excite United's vast Asian fanbase, while the future of South Korea midfielder Park Ji-Sung is uncertain.

Who is Shinji Kagawa?

A 23-year-old playmaker whose 13 goals in 31 games helped Borussia Dortmund win the Bundesliga title. Kagawa was a bargain when he joined from J-League side Cerezo Osaka for just 350,000 euros in 2010

United have claimed their fanbase had almost doubled in the past five years to reach 659 million "followers" globally. Asia accounts for 325 million of those.

The Premier League runners-up had hoped to sign Eden Hazard but, with the Belgium midfielder opting to move to Chelsea, manager Sir Alex Ferguson has acted swiftly.

Ferguson was present when Kagawa scored in Dortmund's 5-2 win over Bayern Munich in the German Cup final, with the player able to play wide or in a more central role.

Kagawa represented Japan at the 2008 Olympics, but missed out on a place in the World Cup squad two years later.

He scored 10 goals in 24 appearances during his first term at Dortmund, earning a place in the Bundesliga's 2010-11 team of the season despite a spell on the sidelines with a broken metatarsal.

The midfielder took a more prominent playmaking role, after Mario Gotze suffered a hip injury, in the second half of the following campaign as he helped his side to back-to-back league titles.

Despite Kagawa's obvious appeal in Asia, United commercial director Richard Arnold has previously denied any suggestion that players are signed to boost profits.

"We don't sign players to sell shirts. We are reliant on 25 players and they are all massive stars. We have 25 George Clooneys.

"When you look at the success we've seen in that part of the world [Asia], it isn't down to any one player or person.