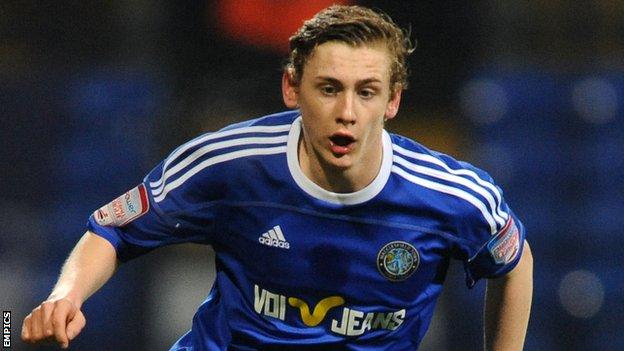 Ipswich Town have completed the signing of Macclesfield defender Elliott Hewitt for an undisclosed fee.

The Wales Under-21 right-back agreed a three-year deal with the Championship club on his 18th birthday.

He missed the final eight weeks of last season with a hip injury but is expected to be fit for pre-season.

"I will be looking to get through my rehab first of all, and then come back as strong as ever and raring to go for Ipswich," he told the club website.

Hewitt, who made his senior debut less than 13 months ago, played 24 times last season as the Silkmen were relegated from the Football League.

He posted on social networking site Twitter: "Really happy to sign for Ipswich. Looking forward to next season and getting back playing. Couldn't of wished for a better 18th present.

"Would like to thank everyone at Macclesfield for what they did for me. The club means the world to me and I hope they bounce back."

The deal could surpass the £300,000 Macclesfield received from Stockport for Rickie Lambert 10 years ago if various add-ons are activated.

Silkmen chairman Mike Rance said: "Elliott's best interests were part of the process, but we've also negotiated hard to get a good deal for the club with a fee that could exceed our transfer record should all of the performance related add ons come to fruition.

"We're pleased that he is going to a club with a realistic chance of making first team appearances."

The move for Hewitt signals a change in transfer policy by Ipswich boss Paul Jewell, who is looking to target young talent rather than experience this summer.

The Suffolk side invested heavily in players over the age of 30 last season, bringing in veterans such as Jimmy Bullard, Lee Bowyer, Ibrahima Sonko and Ivar Ingimarsson.

However, the proved to be one of Jewell' s more successful acquisitions, with the 22-year-old going on to win the supporters' player of the year award.