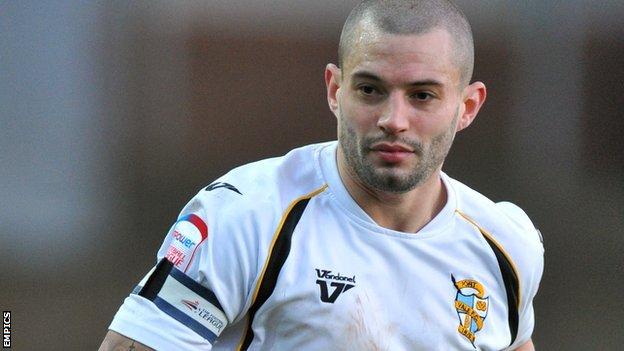 Chesterfield striker Marc Richards has admitted that leaving Port Vale was the "toughest decision" of his career.

The 29-year-old left the financially-stricken Valiants earlier this month after five years at Vale Park.

"It was possibly the toughest decision I've had to make in my footballing career. I didn't necessarily want to leave," he told BBC Radio Sheffield.

"I just felt that if I was going to go on and move forward then now was the time to do it."

He added: "I think under [manager] John Sheridan, Chesterfield are a side who create lots of chances and this is something I want to be part of."

Vale entered administration in March and the 10-point penalty they received as a result all but ended any hopes of securing a play-off berth.

Richards, who notched 17 goals in all competitions in 2011/12, said it was a hard time for everyone at the club.

"It's been a difficult year, with going into administration and not being paid," he continued.

"We all have bills to pay and I had to dip into my savings because I have a mortgage and a family to feed."

After the hardships of the last 12 months, the former Barnsley man is looking forward to mounting a promotion bid with his new side.

"I wouldn't have entertained speaking to the club if their ambition wasn't to be promoted," he continued.

"I spoke to Rotherham and met their manager and the staff there but I felt that Chesterfield was the right move for me.

"They were in a relegation battle last year but the fans kept turning up in large numbers and I know if we have a good season next year then the ground will really be rocking."