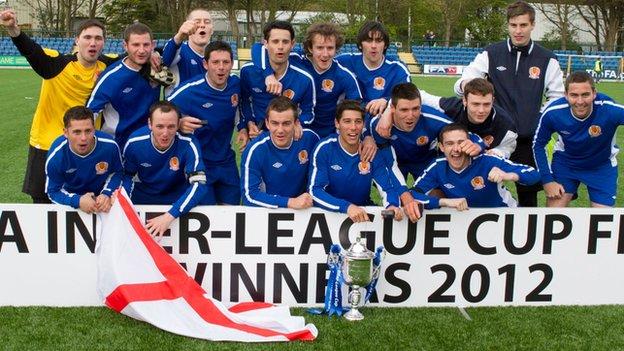 Jersey manager Craig Culkin says next month's International Shield tournament in Gibraltar is a chance for some of the island's best youngsters to stake a claim in his squad.

The likes of Charlie Petulla, Charlie Payne and Ben Rose have been included in Culkin's 16-man squad.

Jersey will face Guernsey, the Isle of Man and Gibraltar in the tournament.

"They need to make a statement that they're man enough and ready to push for a place," Culkin told BBC Sport.

I'm not going there to finish second, third or fourth, that's for sure, there's only one thing I expect from the team that you put out

Jersey will represent England in the Uefa Regions Cup next season after beating the Isle of Man to win the FA Inter-League Cup last month.

"It gives these boys an incentive that if they work hard through the course of the season and improve they're going to be pushing the senior players for places."

Culkin has made four changes to the initial squad that was named in February with Payne, Rose, Garry Lloyd and Rob McBey coming in for Nick Ashley, Joe Murphy, Jamie Savory and Ben Ahier.

And despite missing the likes of established players such as Stuart Andre, Jack Cannon and Chris Andrews, Culkin is confident his side will do well.

"I'm not going there to finish second, third or fourth, that's for sure, there's only one thing I expect from the team that you put out, regardless of the fact that we've not got our strongest squad.

"It might not be vastly experienced but I'm hoping they hold no fear and I think that holding no fear will be a key to us being successful."