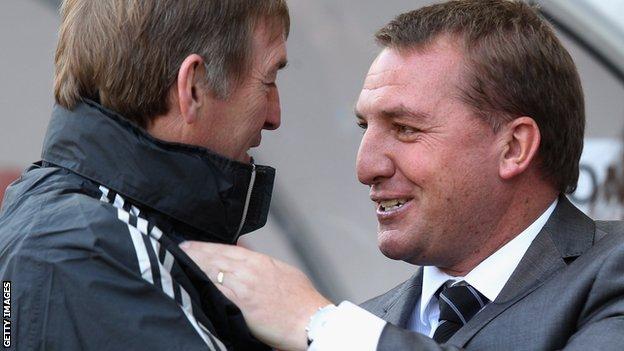 Liverpool have made a second attempt to discuss their vacant managerial position with Swansea boss Rodgers.

Evans is unimpressed with Liverpool's silence as they search for Kenny Dalglish's successor.

"Brendan has said in fairness he has not been interviewed by Liverpool. Where the speculation is coming from we don't know," said Evans.

"It's all coming from the Liverpool end and apparently Liverpool are announcing their manager on Friday.

"That will be interesting to say the least considering Brendan hasn't had an interview."

Rodgers declined an invitation to speak to Liverpool about succeeding Dalglish earlier in the month.

The Northern Irishman met Swansea chairman Huw Jenkins on Tuesday morning but the Welsh club insist the manager's future was not discussed.

Evans says the fact Liverpool are considering two managers with Swansea connections is a sign of the Welsh club's progress over recent years.

Swansea won the League One title during Martinez's two-year reign, while Rodgers led the club to the Premier League for the first time in their history.

"It says a lot for this club that Liverpool Football Club, one of the biggest football clubs in the world, are chasing two of our managers - Roberto and Brendan - two very respected managers in the game," said Evans, who played in all four divisions of the Football League for Swansea in the 1970s and 80s.

"I think it will be Roberto Martinez going to Liverpool and good luck to Roberto there."

Newspaper reports have also suggested Gylfi Sigurdsson's move to to the Liberty Stadium on a permanent basis could be in jeopardy if Rodgers leaves the club.

Swansea have agreed personal terms with the Iceland midfielder after confirming a club record transfer fee of £6.8m has been agreed with German club Hoffenheim.

The 22-year-old is expected in Swansea later this week to undergo a medical, but any deal could be dependant on Rodgers' next move.