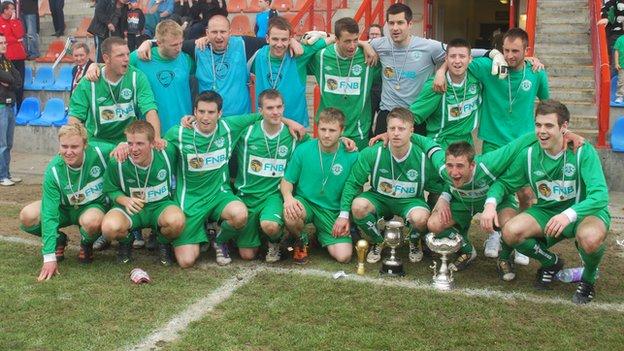 Guernsey manager Kevin Graham says the island's FA must meet with Guernsey FC to discuss the future of the island's representative side.

Graham took charge of Guernsey for the first time last season, leading them to 2-0 win over Jersey in the Muratti.

There is a future for representative football, the the two parties have got to work together

With Guernsey FC playing in a UK league Graham says more must be done ensure the future of representative football.

"There needs to be some discussions between the Guernsey FA and GFC to work out the plans going forward," he said.

"The right people both in Guernsey and Jersey need to ensure that adjustments are made to cater for the demands of a season in the UK."

Graham's side was hit by Guernsey FC matches last season, with the club having a Combined Counties league match on the same day as the semi-final in Alderney and playing the Premier Cup final three days before the Muratti.

It meant Graham had to discuss with Guernsey FC manager Tony Vance and assistant Colin Fallaize over who he could and could not pick, especially for the semi-final.

"The fact I have such a strong relationship with Tony and Colin is great, but we can't rely on that forever," Graham continued.

"There is a future for representative football, but the two parties have got to work together."

Graham says he will not take charge of the island team, which plays in the FA Inter-League Cup as well as the Muratti matches, beyond the end of next season.

He was brought in after Vance quit the role, which he held alongside being in charge of Guernsey FC, late last year after falling out with the GFA over player availability.

"Having me in charge of the team is not a long-term solution as I'm based in the UK," added Graham.

"We need to find a suitable model for the future and give some of the other coaches on the island the chance to take charge of the side."