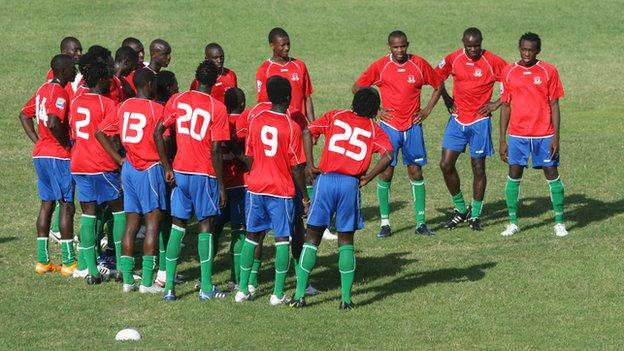 The Gambia has appointed Italian Luciano Mancini as head coach of the national football team.

Mancini, 56, has taken over the running of the team from Peter Bonu Johnson, who has been demoted to his assistant.

The Scorpions have thus reversed the roles of their coach and assistant just days before the side starts its 2014 World Cup qualifying campaign.

The Gambia host Morocco on Saturday, before travelling to Tanzania for their second Group C fixture on 10 June.

Ivory Coast, who also changed coach this week, are the fourth team in the group.

Mancini, who formerly led Italian second division side Grosseto, came on board as the Gambia's assistant coach in April.

"This is a collective decision by the parties concerned," said Omar Sey, a spokesman for the Gambian FA.

Local coach Johnson had taken charge of the national side in January, after Belgian coach Paul Put was fired in November after failing to qualify for the 2012 African Cup of Nations.

Mancini will hope to go one better when overseeing June's 2013 Africa Cup of Nations qualifier away to Algeria.

The Scorpions, who have never been to a Nations Cup or World Cup, trail 2-1 from the first leg in February.