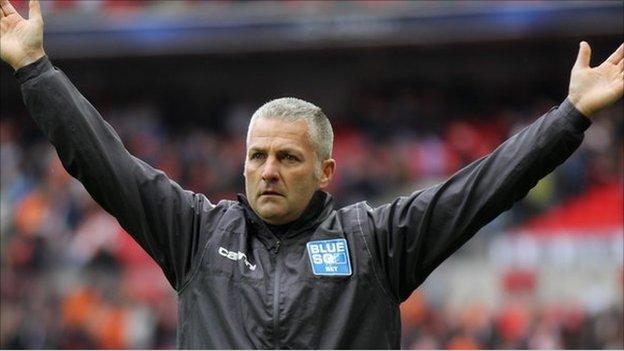 York City manager Gary Mills has no plans to carry out a major overhaul of his first-team squad in the wake of their promotion to League Two.

Mills said he will look to strengthen in some areas but he does not want to disrupt his current group of players.

He told BBC Radio York: "There'll be a few players that come and join us but I've got a good squad of players.

"I'm certainly not going to break up too much of what I believe is a good squad to go forward."

York secured their return to the Football League after an eight-year absence with a 2-1 win over Luton at Wembley in the Blue Square Bet Premier play-off final earlier this month.

There's been brief conversations with a couple of the agents

However, Mills insisted that no-one at the club should get "carried away" by what they have achieved so far.

Of his plans to strengthen the squad, he said: "There's a couple of players I'd like to bring to the football club .

"There's been brief conversations with a couple of the agents for these players because that's how it works. The players are aware.

"I'm not going to be rushed into anything. It's a case of taking stock and doing it in the right way."

Mills is also dealing with contract issues among the players who secured promotion.

"Two or three players had clauses that triggered another year for them through games played and success that we had.

"There's a couple out of contract that I've had a brief chat in the time we were away together.

"Daniel Parslow, Ashley Chambers and Adriano Moke are three that I've said I want to speak to about next season.

"There are obviously others and decisions have to be made," he added.