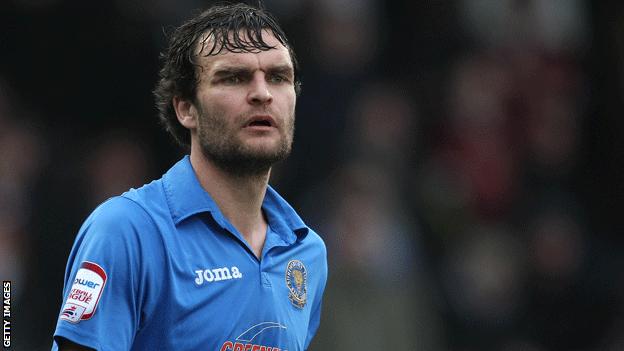 Shrewsbury Town skipper Ian Sharps says his surprise decision to rejoin Rotherham was because he was offered only a one-year contract at the Meadow.

Sharps, 31, raised eyebrows last week when he signed for his old club, League Two Rotherham, just a month after leading Shrewsbury to League One.

"I wanted a longer contract at Shrewsbury and they weren't prepared to give it," he told BBC Radio Shropshire.

"I've got three young children and I need to look after their well being."

Sharps was only offered a one-year deal by Shrewsbury and, although he admits to a few sleepless nights being torn over what to do for the best, he opted for the greater security of a two-year contract with Steve Evans' ambitious Millers.

"With a one-year deal, there's not much security," he added. "With two, there's that little bit more.

"I admit I did wake up a few times early in the morning thinking about what I was going to do and got a bit upset wondering what I should do, but hopefully I've made the right decision.

"I spoke to a few other clubs but Rotherham are the most ambitious that I spoke to.

The whole set-up at Rotherham reminds me of when I came to Shrewsbury. They look geared to go up a division at least

"With the new stadium they're building and the manager being very impressive in one-to-one situations, it felt right to go back.

"I'm proud of what we've done this year at Shrewsbury. We had the second-best defence in League Two and the third best in the whole of the three divisions.

"To drop back down a level probably looks strange, but the whole set-up at Rotherham reminds me of when I came to Shrewsbury. They look geared to go up a division at least."

Warrington-born Sharps, 31, made 193 appearances for his first club Tranmere before moving to Rotherham in 2006.

He then clocked up 187 games for the Millers in his first four-year spell with the club before becoming Turner's first signing following his return to Shrewsbury in June 2010.

He missed just six league games in his two seasons with Shrewsbury.