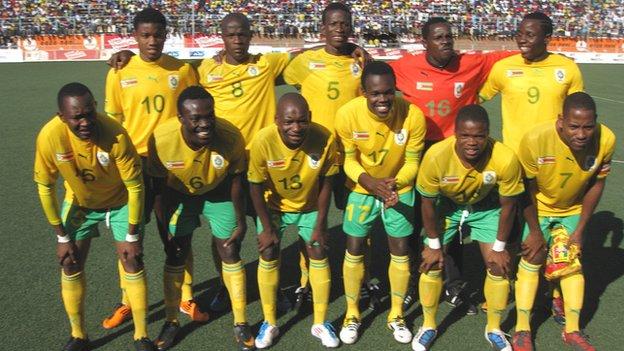 Ovidy Karuru, Khama Billiat and Willard Katsande are all available after being cleared of allegations of match-fixing.

"It's a big boost for the team and I think we've now got a balanced team," Gumbo told BBC Sport.

Zimbabwe open their Group G campaign when hosting Guinea on Sunday, before playing in Mozambique next week.

Seven-time African champions Egypt are the fourth team in the group.

Gumbo had to field a weakened side when Zimbabwe last played, losing 2-1 to Burundi in an Africa Cup of Nations qualifier in February.

But having a greater pool of players to choose from has raised spirits in the camp, the coach says.

"These three players are giving confidence to the team and boosting the morale," added Gumbo.

There are 66 players and 16 officials still suspended from the national team, with Gumbo in the position of interim coach as Norman Mapeza is among those still under investigation for match-fixing.

Many new faces have been brought in to the squad, among them Bradley Pritchard, a midfielder with English Championship side Charlton Athletic.

Bradley Pritchard came on as a substitute for Zimbabwe in Benjani Mwaruwari's testimonial match last Saturday.

Gumbo has promised supporters that Zimbabwe will play exciting football in their quest to qualify for the World Cup and the Nations Cup.

"I'll try to bring a little bit of excitement into the game, because my policy is about attacking and playing entertaining football and I've really got the players who can play that kind of football," he said.

"Guinea are going to be very difficult opponents, but we have home advantage and we're prepared for a difficult match."