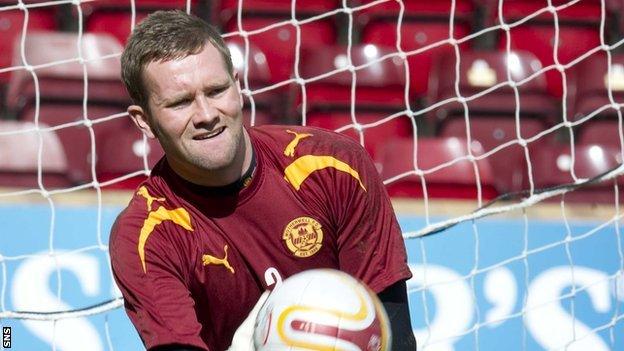 Goalkeeper Lee Hollis has committed his future to Motherwell by signing an extended two-year contract at the club.

The 26-year old has made two first team appearances since signing in 2010, the year he was released by Airdrie United.

Hollis made his Motherwell debut in the last league match of the 2010/11 season, a 4-0 defeat at Celtic.

I will keep myself ready if called upon

Hollis, back-up to first-choice keeper Darren Randolph, told Motherwell's website: "I am pleased to have signed again and it's an added bonus having the security of a two-year contract.

"I had a frustrating time last season, having to miss six months due to surgery, but I feel great now and can't wait for pre-season to begin.

"I push Darren as hard as I can every day but I can't groan too much about being second in queue. He has kept something like 35 clean-sheets in two seasons and won the PFA goalkeeper of the year; it's hard to argue with that.

"But I will keep myself ready if called upon."