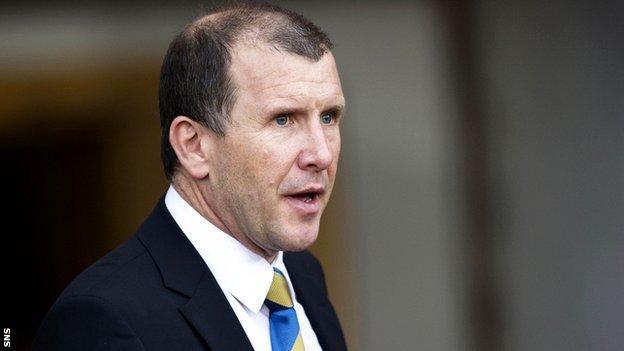 The Scottish FA will not challenge a Court of Session ruling which overturned a 12-month transfer ban imposed on Rangers.

The association will now hand the matter back to its appelate tribunal.

Rangers were handed the embargo over a disrepute charge and lost an initial appeal before Lord Glennie ruled the ban should be reconsidered by the SFA.

"Football must always operate within the law of the land," said SFA chief executive Stewart Regan.

"In light of it is necessary to clarify the position of the Scottish FA in relation to the disciplinary sanctions imposed on Rangers FC.

"It is regrettable that a member club has sought recourse for a football disciplinary matter through increasingly costly civil court action.

"The right of appeal is now open to the Scottish FA through the Court of Session. However, by so doing, the very principles on which the Scottish FA - and, for that matter, Uefa and Fifa - are founded, namely football disciplinary matters being dealt with within its own jurisdiction, would be fundamentally compromised.

"Therefore, it is our intention to accede to Lord Glennie's request and refer the matter back to the appellate tribunal, which will consider the remaining sanctions open to it.

"Details of a new hearing date will be confirmed in early course."

Rangers, who have been in administration since February, were charged with bringing the game into disrepute mainly over the club's failure to pay more than £13m in taxes last season.

But the Ibrox club insisted the SFA's judicial panel did not have the power to impose a ban on registering players over the age of 18 and exercised their right to appeal the decision.

A different SFA panel upheld the decision and Rangers then took the matter to the Court of Session.

"The Scottish FA is bound - as are all other decision-making bodies in this country - by the supervisory jurisdiction of the court under Scots Law," added Regan.

"It is important to reiterate that the additional sanction of a registration embargo was imposed by an independent judicial panel chaired by a leading QC, Gary Allan, and upheld by an appellate tribunal chaired by a Supreme Court judge, Lord Carloway.

"That in itself vindicates the robustness of the Judicial Panel Protocol, which has been questioned in hackneyed comment in certain quarters this week.

"It should be noted that two vastly experienced Supreme Court judges, Lord Carloway and Lord Glennie, arrived at diametrically opposed viewpoints on the same issue.

"With our annual general meeting taking place on Wednesday 6 June, it will be appropriate to remind member clubs that by very dint of their membership of the Scottish FA, they accept and abide by the Articles of Association."