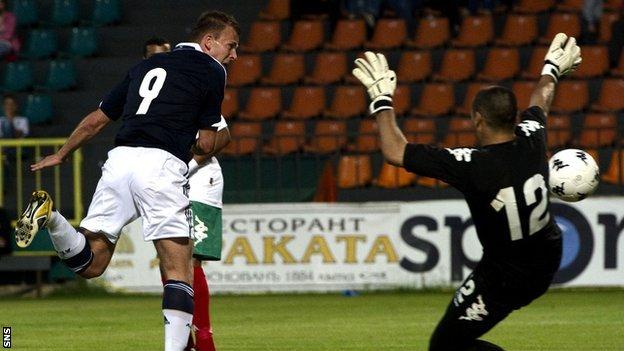 Scotland's Under-21 side were denied a Euro 2013 qualifying victory by an injury-time goal in Bulgaria.

Georgi Milanov fired the hosts in front in the 33rd minute.

Jordan Rhodes headed Scotland level midway through the second half and the striker's late second looked like it would seal victory for the visitors.

But Georgi Kostadinov drew Bulgaria level and, though Scotland now top Group 10, the Netherlands can return to the summit when they play Luxembourg.

The Dutch play their game in hand in Ettelbruck on Friday with the Scots, who remain unbeaten in the group, next in action at home to Luxembourg in September.

Johnny Russell, fresh from being involved in the Scotland senior squad's weekend trip to the United States, had an excellent chance in the 13th minute after Stefan Kunchev misjudged a long ball.

The ball bounced over the keeper's head, Russell ran on to it and tried to slide home a shot as Kunchev desperately tried to get back but the Bulgarian defence managed to clear the danger.

Rhodes had an effort saved and sent another over before Milanov played a one-two with Aleksandar Tsvetkov and put Bulgaria ahead.

Kunchev denied Liam Kelly early in the second half as Scotland began to assert themselves.

And the leveller came in the 69th minute from a short corner routine, Rhodes' glancing header from Scott Allan's cross beating Kunchev.

The Scots kept pressing and a long ball in the final minute of regulation time unlocked the Bulgaria defence with Rhodes adjusting well to fire into the net.

But Bulgaria hit back in the third minute of injury time as Scotland failed to clear their lines at a corner and Kostadinov beat Mark Ridgers.