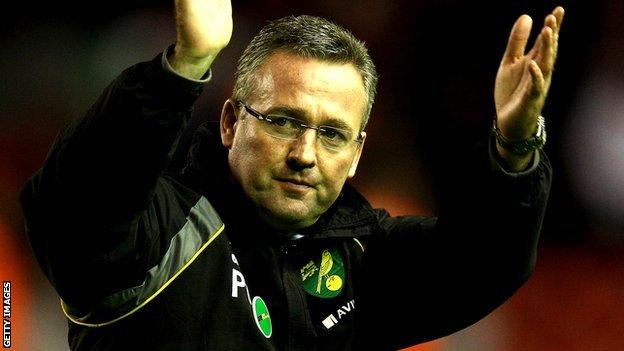 Villa have been without a manager since sacking Alex McLeish the day after the final game of the season.

Lambert, 42, guided his Canaries side to a 12th-placed finish in their first season back in the Premier League.

The Scot signed a new deal at Norwich in May 2011, and a move to Villa would be likely to involve compensation.

Lambert, who enjoyed spells at Celtic and Borussia Dortmund in his playing days, managed at Wycombe and Colchester before joining Norwich in August 2009.

At the time the Canaries were in League One and reeling from a 7-1 defeat to Colchester, but Lambert masterminded successive promotions to reach the top flight in his first two seasons in charge.

He ticks most of the necessary boxes for Aston Villa, and local newspaper polls and internet forums agree.

The Villans endured a poor 2011-12 Premier League campaign, finishing just above the relegation zone after winning only four of 19 games at home.

McLeish departed the club on 14 May after just 11 months in charge.

Villa are not the enticing proposition they once were, and Norwich are no 'country cousins' by comparison - Carrow Road's 22,000 season tickets last season matched that sold at Villa Park.

Norwich chief executive David McNally is a tough operator and will do his utmost to keep Lambert. The Scot will need convincing by Villa, if they are allowed to talk to him.

Villa goalkeeper Shay Given, who is currently on international duty with the Republic of Ireland, said he would welcome the appointment of Lambert.

"If Paul was to come in, he would be a great appointment because he is a fantastic manager," he said.

"Since he took the hot-seat at any club he has been at, he has just gone all the way up all the time, so hopefully if they can get that done, that would be great news for the club."