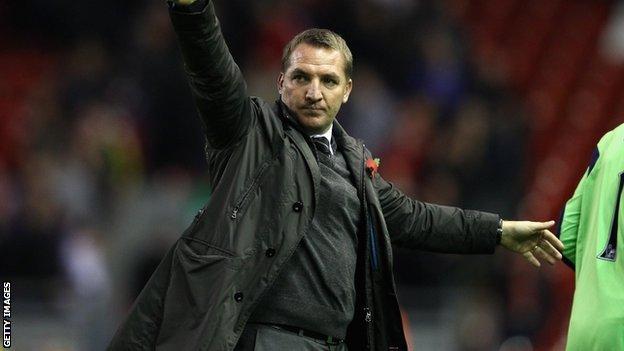 Former Liverpool midfielder Jan Molby says that nothing can prepare Brendan Rodgers for the size of the task he will face as manager at Anfield.

As much as Andy Carroll did better in the last month of the season for Liverpool, this will be a real tricky time for him

"The fact Liverpool didn't finish in the top four spelled the end for Dalglish so he will be left in no doubt what's required," Molby told BBC Sport.

"You cannot prepare people for the size of the club."

And he added: "Rodgers has done a super job at Swansea playing some good football but it's a step up and expectations will be massive."

Rodgers is Liverpool's third manager in less than two years, and was confirmed as the new boss at a media conference on Friday. Roy Hodgson was appointed as successor to Rafa Benitez in July 2010, before Dalglish took over in January 2011.

Owners Fenway Sports Group also interviewed Wigan boss Roberto Martinez as they sought a replacement for Dalglish, but Molby, who made 292 appearances in a 12-year spell at Anfield, thinks Liverpool needed an older head to lead the club out of a turbulent period.

European champions five times, the Reds have failed to finish in the Champions League places in each of the past three seasons, a period that has also seen a protracted takeover of the club.

"I did feel personally that it was a job for an experienced manager," Molby stated.

"We just finished eighth in the league, a long way off the Champions League places, and it will be a difficult job. But they have gambled - they feel that Brendan is the right manager, he fits the profile, he's a young, up-and-coming manager, and wants to prove himself."

Molby believes Rodgers's favoured passing style, which has seen Swansea win plaudits during their first Premier League season, will be met with approval by Liverpool's players.

But he suggests refreshing the squad will be the new manager's biggest task and questions specifically where striker Andy Carroll might fit in.

"The most important thing is player recruitment," Molby said. "That's an area that didn't go particularly well 12 months ago. Liverpool still need a playmaker, a wide man who can deliver and a goalscorer.

"And one of the first things I thought [about the appointment] was how does Andy Carroll fit into his plans?

"If you look at the way that Danny Graham played at Swansea, he could come deep, he could take part in the build-up and had real pace to get in behind the defence - but Andy Carroll doesn't.

"So, as much as Andy did better in the last month of the season for Liverpool, this will be a real tricky time for him."