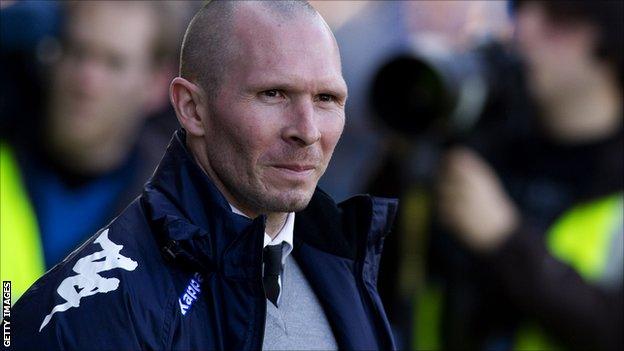 Portsmouth manager Michael Appleton has admitted the current uncertainty over the club's future is severely affecting his early attempts to build a squad to compete in League One.

I'd be slightly surprised if there are many of [the high-earners] who want to play in League One, but the problem they'll have is can they recoup the type of salary they're earning at Portsmouth

The south coast club is still in administration after being relegated from the Championship.

Players are being sold but Appleton is unable to recruit replacements until the club comes out of administration.

"I have to hope players will be willing to wait," he told BBC Radio Solent.

Appleton said he had held talks with former owner Balram Chainrai, who has made an offer to buy the club out of administration, regarding a budget for next season.

"If it's what we agreed then I do believe we can be quite competitive in League One," he said. "But it is almost impossible to sell the club to players at the moment.

"I have to go and do the personal touch with every single player I think can help the football club, sell myself and the club to them, and then hope they will be willing to wait until the back end of the summer when hopefully we will be out of administration and able to do business.

"But there are a lot of clubs wanting players I want, so as well as a waiting game it's like a game of poker with agents and other clubs."

Another factor which is affecting Appleton's attempts to rebuild his squad is the number of high-earning players still at the club, including Tal Ben-Haim, Dave Kitson, Hayden Mullins and Liam Lawrence.

"I'd be slightly surprised if there are many of them who want to play in League One, but the problem they'll have is can they recoup the type of salary they're earning at Portsmouth," said Appleton.

"Somewhere along the line there'll have to be a compromise that's good for both parties - if there isn't it will jeopardise everything we want to do.

"The frustration is that when the players return [for pre-season training] on 5 July I'd like to have 18 new faces and a brand new squad.

"But the likelihood is I'll have five or six players unlikely to be involved, there's no guarantee I'll have the 18 or 20 players you need, so it ends up being a waste of pre-season - which is so key and so important to your physical and tactical preparation."