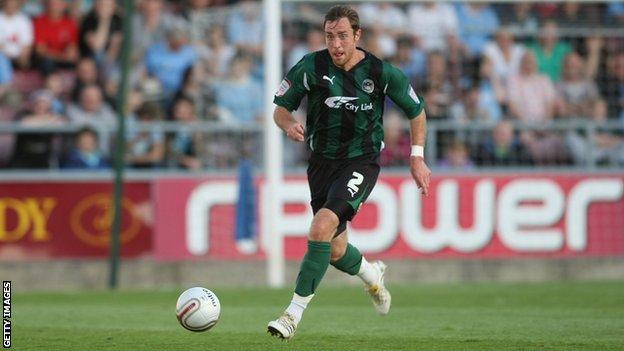 Cardiff City have had a written transfer bid for defender Richard Keogh turned down by Coventry City.

The Bluebirds and fellow Championship outfit Bristol City have made bids for the highly-rated 25-year-old.

"From the board level, to the executive, to the fans, to everyone we want him to stay," said Steve Waggott, Coventry City's development director.

Cardiff are considering an improved offer for the defender, who has opened contract talks with Coventry.

It's hard to say in the commercial world of football, but perhaps money isn't the main thing in the conversation [with Richard Keogh]

"The discussions over the last few weeks with his agent and with himself are can he extend his contract?" added Waggott.

"Can he lead us back into the Championship? He's a talisman."

Keogh, who can play centre-back or full-back, spent three seasons with Bristol City between 2005 and 2008.

He was part of the Coventry side relegated from the Championship to League One at the end of last season and has a year left on his current contract.

Waggott said they have had lengthy talks with Coventry's player of the season over a new deal, and confirmed the Sky Blues have turned down written offers from Bristol City and Cardiff

But Waggott admits keeping the player is likely to depend on agreeing a deal to extend his contract beyond the end of next season.

Manager Andy Thorn wants Keogh, who is getting married on the weekend, to lead Coventry's promotion bid from League One.

"His emotional attachments to Coventry are very high," said Waggott.

"He loves the whole supporter base and how he's improved as a player.

"He's come on a lot with Andy Thorn. On the other side he's got his aims and aspirations and dreams of playing at the very top level.

"It's hard to say in the commercial world of football, but perhaps money isn't the main thing in the conversation.

"It's about what are the aspirations of Coventry City football club."

Keogh's sending off in their final home game of the season ended a run of 90 consecutive league matches in which he played every minute.