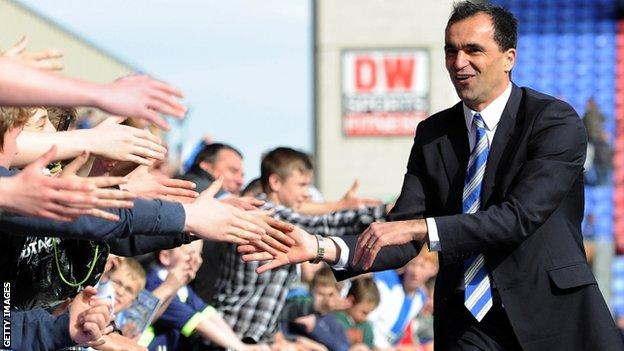 Roberto Martinez has committed his future to Wigan, according to chairman Dave Whelan.

Martinez held talks with both Liverpool and Aston Villa before confirming he plans to remain in charge at the DW Stadium.

He returned from a holiday in Barbados this week to the promise of renewed investment at Wigan from his chairman.

"We're just so pleased that he's staying with us for another season," Whelan told Sky Sports.

Martinez spoke with Whelan on Wednesday and was assured plans for a new £1.5m indoor training pitch would be pushed through as well as money for new signings.

He added: "We want Roberto to be happy at Wigan and we'll be aiming to make sure we do everything to help him.

"We've discussed a lot of things and it was a productive afternoon. He's got two years left on his current contract and we will be looking to extend that.

"We've also agreed to build up the academy and the training facilities."

Whelan revealed for the first time that his manager had been allowed to discuss the vacant post at Villa who are looking for a manager after sacking Alex McLeish - a position Norwich manager Paul Lambert is now favourite to take.

He said: "He has had some talks with Villa but he's not going to go there. Villa are a fantastic club with great fans, but I never thought they were big enough for him.

"I've said all along that I never thought he would end up there, and, fortunately for us, that's how it has turned out.

"If Roberto is to go anywhere, it will be to one of the top clubs in Europe.''

Martinez had been a front-runner for the Liverpool job, having held talks with owner John W Henry in Miami last week.

But Swansea City manager Brendan Rodgers is now expected to fill that position.