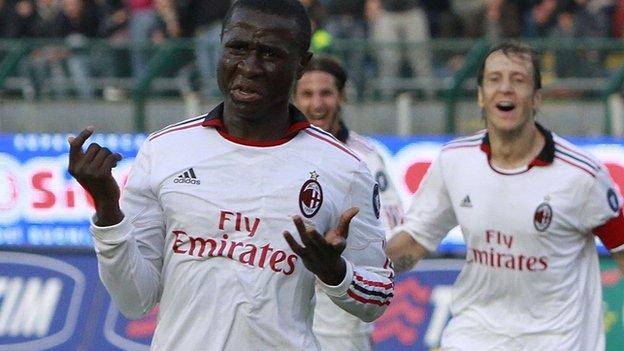 A host of key players will be missing from Africa's opening round of 2014 World Cup qualifying group matches this weekend.

Sierra Leone's Rodney Strasser has been ruled out of Saturday's Group B tie at home to Cape Verde.

The AC Milan midfielder has failed to recover from an ankle injury he suffered in training on Wednesday.

Logistical problems have prevented the South Africa-based player from making it to Bangui for Saturday's Group A clash against Central African Republic.

The midfielder is now back in Botswana, while captain Thum has been confirmed as an absentee due to an ongoing injury.

Malawi coach Kinnah Phiri is hopeful striker Atusaye Nyondo may still play on Saturday despite twisting his ankle in training on Thursday.

Phiri has few options up front and the team doctor has assured him after treating Nyondo that the the South African-based striker has a chance of playing against Kenya in Nairobi on Saturday.

The Flames have problems up front with Chiukepo Msowoya and Esau Kanyenda already ruled out of the Group F tie.

Kanyenda is unavailable after joining a Danish club recently, while Msowoya has been cut from the side after reporting late for training.

Strasser, meanwhile, says he may recover in time for Sierra Leone's home clash against Equatorial Guinea on 9-10 June.

"I had a knock on my ankle during training and am out of the game. I'm disappointed that I'm going play.

"But I hope to be fit in time for our match against Equatorial Guinea on 9-10 June," Strasser told BBC Sport.

"I can confirm that Strasser will not be playing against Cape Verde," said coach Lars Olof Mattsson. "We'll surely miss him. But we can win without him."

A number of other key men for countries will be absent this weekend, with former Cameroon vice-captain Enoh Eyong among them.

Ghana start their Group D campaign against Lesotho on Friday without Asamoah Gyan, who is on a self-imposed exile, as well as the injured Andre 'Dede' Ayew.

Meanwhile, Senegal will be without Demba Ba and the injured quartet of Issar Dia, Kader Mangane, Souleymane Diawara and Pape Malickou Diakhate for Saturday's Group J match against Liberia in Dakar.