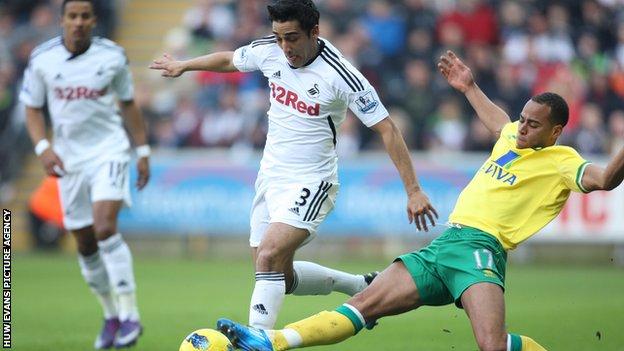 Neil Taylor is confident Swansea City will appoint a new manager in the mould of the departing Brendan Rodgers.

The Swans have begun their search for a successor to Rodgers who is expected to be unveiled as the new Liverpool boss.

Wigan assistant manager Graeme Jones is the current bookmakers' favourite to take over from Rodgers.

Full-back Taylor is confident Swansea will find the right man with the right philosophy: "I think we will be fine in getting that sort of manager."

Chairman Huw Jenkins has already claimed that the search for Rodgers' successor has begun.

We don't want to be on a downhill slide from now onwards. That is at the forefront of the players minds at the moment and whether we can get the right manager in

"It's not what is needed but what will happen," said Taylor.

"Huw has said it for the last five or six years. We had Roberto Martinez, Paulo Sousa and Brendan adding the ingredients we needed to move to the next level.

"He [Jenkins] will look for a similar sort of manager, he knows what works and it's what he likes to watch and what the fans want to watch.

"I think we will be fine in getting that sort of manager."

Brighton boss Gus Poyet, Blackpool's Ian Holloway, Birmingham's Chris Hughton and former Denmark international Michael Laudrup have all been linked with the vacancy at the Liberty Stadium, along with Jones.

Bookmakers have suspended betting on Jones, Martinez's assistant at Wigan, taking over from Liverpool-bound Rodgers. The 42-year-old was targeted by Swansea in 2010 before Rodgers was appointed.

Poyet is another strongly tipped with bookmakers, having been approached by Swansea in 2010 prior to their appointment of Rodgers.

Taylor underlined it was now a priority that Swansea find the right man and plans are made for life without Rodgers for the new season.

"Swansea are going to be looking for a new manager and that is the priority," said Taylor.

"It's about getting the right man in to follow what has been great progress.

"We don't want to be on a downhill slide from now onwards. That is at the forefront of the players' minds at the moment and whether we can get the right manager in."

Taylor, though, admitted the loss of Rodgers to Liverpool was a huge blow but wished the Northern Irishman all the best at Anfield.

"We are gutted because he has been a great manager to work for and we learned loads and loads of things," said Taylor.

"It has been a great time and he is a top, top manager.

"You feel sad because you are losing a manager who you were learning so much from, alot of us had made great strides under him.

"We just have to congratulate him and obviiously we wish he didn't have to move on so soon but when a club like Liverpool comes calling it's very different for anyone to say no."