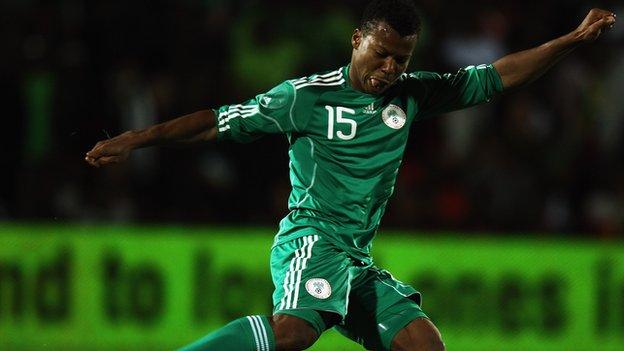 Nigeria coach Stephen Keshi has admitted that there is pressure on his side ahead of Sunday's 2014 World Cup qualifier against Namibia in Calabar.

"The players need to perform," said Keshi, appointed after Nigeria failed to qualify for the 2012 Nations Cup.

"There is always pressure because the fans still feel disappointed with the last Nations Cup.

"I'm not going to make excuses. They need to play good football and win the fans back. That's what Nigerians want."

The Super Eagles open their 2014 campaign against Namibia and Malawi.

Thery will then host Rwanda in the second leg of a first round 2013 Africa Cup of Nations tie - they drew the first leg 0-0 in February.

Former Nigeria captain Keshi is aware his players need to win over sceptical fans and he has already laid down the law by omitting Premier League stars John Obi Mikel, Taye Taiwo and Peter Odemwingie from his squad.

The build-up to Sunday has also been blighted by a chaotic trip to Peru for a friendly and the absence of the country's most experienced player and captain Joseph Yobo.

He also has his job cut out after goalkeeper trainer Ike Shorumu revealed that the foreign-based players have struggled with the heat in Calabar.

Yet Keshi has been able to find respite in the scouting reports on his opponents in next month's series of qualifiers.

Now is the time to stop being arrogant, give our best and show why we were once rated highly in Africa

"Nothing comes easy. It's the reason I admit that only the players can take the pressure off by playing very well," Keshi told BBC Sport.

"Importantly I know a little bit about all the countries we are facing next month. Namibia have a couple of players in Europe and South Africa, some good players from their local teams and experienced players in the midfield.

"I'm happy we've got strong information about them, so we'll put all that's happening behind us on the pitch and not in the media."

Last November, the ex-defender was handed the mandate of steering the side to the 2013 Africa Cup of Nations and 2014 World Cup.

Keshi achieved a major qualifying success when leading unfancied Togo to the 2006 World Cup in Germany.

But the 50-year-old wants the support of everyone as he embarks on a quest to revive the faltering Super Eagles.

"We need the support of the fans, we need to form a strong a unit in our support. It's not all about individual but as a strong team and country," he said.

"Nigeria is a big country but we should not target individuals for criticism. It affects the players and team psychologically.

"We win together and we lose together. We need to put the past behind us and focus on taking Nigerian football forward.

"If the players do all they need to do on Sunday then we all can start to approach the remaining matches with a strong expectation."

Midfielder Raheem Lawal, who plays for Spanish side Atletico Belareso, has been ruled out of Sunday's game after suffering a visa hitch.

Striker Ikechukwu Uche has told BBC Sport the Super Eagles need to prove on the pitch why they were once rated as the best team on the continent.

"We need to change our approach and mentality, both individually and as a team.

"Teams hear Nigeria and they feel we are no longer a strong force. Now is the time to stop being arrogant, give our best and show why we were once rated highly in Africa."