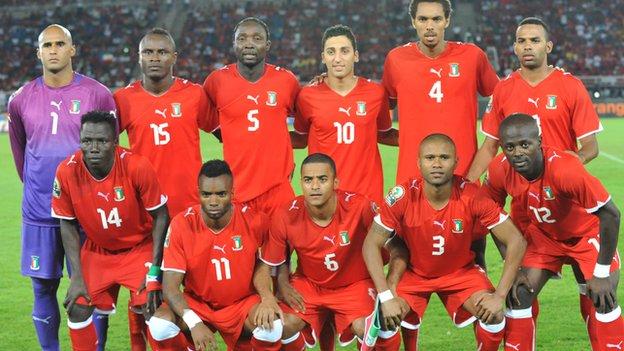 Equatorial Guinea are desperate to build on the experience gained from co-hosting this year's Africa Cup of Nations, says midfielder Juvenal.

The National Lightning stunned pundits, and even themselves, by beating Libya and favourites Senegal in January.

And Nations Cup captain Juvenal says the team knows how to carry its form into June's 2014 World Cup qualifiers.

"We saw at the Nations Cup that you can beat any rival with a lot of hard work and determination," he said.

We have high hopes to top our group but we it is going to be very, very difficult

"We knew we had to play well to beat Libya and Senegal and we were a little surprised about our results - with the win over Senegal a big surprise."

Equatorial Guinea, who had never contested a Nations Cup prior to co-hosting this year's finals with Gabon, beat Libya 1-0 and Senegal 2-1 before a quarter-final exit against Ivory Coast.

Such a run of form propelled the national team up the Fifa rankings, rising from 151st spot in January to a current rating of 103rd.

It also instilled a level of confidence previously unseen among Equatorial Guinea's current group of players, and they will aim to take that into Saturday's opening Group B qualifier in Tunisia.

"The players in our squad have lots of confidence about playing well in Tunisia and picking up our first points in these World Cup qualifiers," the Spain-based Juvenal told BBC Sport.

"Tunisia are going to be a very difficult team and they are playing at home but with the experience gained during the Nations Cup, we want to hold on to our good form and continue winning games.

"It's a big job and a very difficult one but we have lots of confidence."

Equatorial Guinea, who qualified for the group stages after beating Madagascar 3-2 in the preliminary round, will also meet Sierra Leone and Cape Verde in the qualifying group.

The National Lightning host Sierra Leone, who they beat 2-0 in a 2010 World Cup qualifier in 2008, on 9-10 June and Juvenal is desperate to keep the Nations Cup spirit alive.

"We want to repeat the euphoria that our fans enjoyed during our success and keep giving them joy," he said.

"Sierra Leone is a young team trying to create a new generation of players, I believe, and they are always dangerous when they play at home.

"Cape Verde are very technical, with some players playing in Portugal, and they are going to be a very complicated rival.

"We have high hopes to be able to top our group but we know that it is going to be very, very difficult."

Four months on from some of the best memories of his career, Juvenal admits that the highs experienced during the Nations Cup made it difficult to adjust to normal life afterwards.

"When one lives through an experience like that, it is very difficult to get used to the life that one lived before," recalled Juvenal, who plays for Sabadell in Spain's lower divisions.

"When I finished the Nations Cup, I swiftly left for Spain and it was a bit of a contrast - and difficult to take - to go from a party atmosphere and great euphoria to daily life with my Spanish team.

"But my Nations Cup experience is one I can never forget, because I had the opportunity to make the people of my country happy."