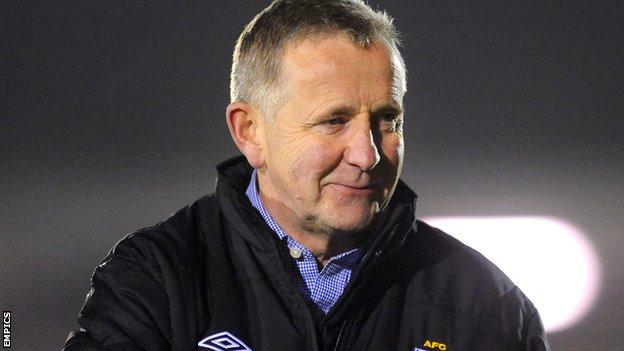 The Dons, who finished 16th in League Two last season, announced the capture of right-back Curtis Osano this week.

Brown told BBC London 94.9: "We need to make some changes at the back. Curtis is just the first piece of our defensive jigsaw.

"I'm looking to rebuild the side to hopefully push for promotion either this year or next year."

He added: "We need to bolster ourselves up a bit and physically it's a harder league than the Conference.

"We always expected it to be quite a large leap but I was surprised by the number of goals we conceded.

"We try and play open, expansive football so some fresh blood in there will hopefully see us win a few more home games and push us up the table higher."

Meanwhile, Brown says the amount of effort he puts in over the close season to identify and sign new players will have a direct impact on their campaign.

"Although we've moved about 12 players on, we'll probably only get about six in," he continued.

"We're going to tighten the squad a bit, and possibly utilise loans if we need to.

"I think and believe if I work really, really hard over the next two to three weeks then my job becomes easier during the season.

"The quality of player you get in will reflect on the results later on."