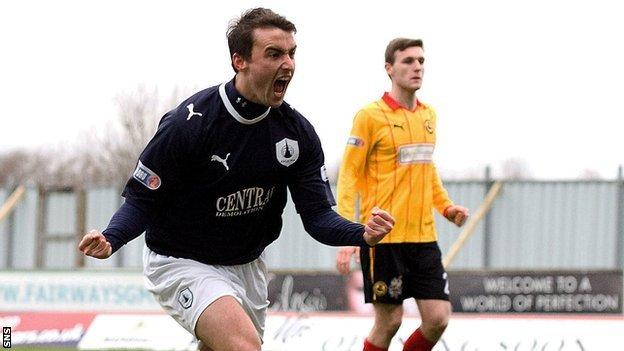 Mark Millar will join Dundee United on a three-year deal in June, when his contract at Falkirk comes to an end.

Millar has spent the last two years at Falkirk in the Scottish First Division and also had a season-long loan at Ujpest during his time with Celtic.

The 24-year-old has been capped at Scotland Under-19 and Under-21 level.

"Mark has shown the right attitude and mentality in leaving Celtic to go down a division to kick-start his career," said United boss Peter Houston.

"That decision has been vindicated for him in now signing this pre-contract agreement which will enable him to showcase his talent at SPL and European level.

"He is a different style of player to those we have here already and the way he plays the game will make him a fans' favourite here at Tannadice once he arrives."

Houston has also tied up Michael Gardyne on a pre-contract agreement, the midfielder leaving Ross County, with Scott Robertson and Danny Swanson departing United this summer.

"In my opinion we have now captured the two best players in Division One with Mark Millar and Michael Gardyne," added Houston.