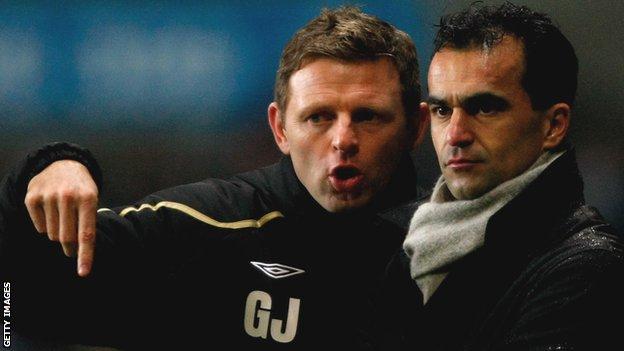 Chairman Huw Jenkins has revealed Graeme Jones is one of small number of candidates to succeed Brendan Rodgers as Swansea City manager.

The Swans chairman has confirmed that Jones, the Wigan Athletic assistant manager, has been contacted over the vacancy at the Liberty Stadium.

"There are a small number of people who would suit our football club," Jenkins told BBC Wales Sport.

Rodgers has left Swansea to manage Liverpool on a three-year deal.

Swansea, who are looking for a new manager for the third summer in four years, moved quickly to speak with Jones after being granted permission by Wigan to open talks.

"We are speaking to a number of people and try to do things the right way by getting permission off clubs to speak to people," said Jenkins.

"There are a small number of people who would suit our football club and that we would all be happy to work with.

"Graeme Jones is obviously one of them but over the next few days we will be reviewing all the initial conversations and moving forward."

Jenkins also admitted they would be casting their net wide and did not rule out appointing a manager from abroad.

"There are quite a few options for us but we will have to see what route we decide to take," added Jenkins.

"There are a variety of options, but like we did with Brendan, it's about finding the right personality who can work at our club."

Wigan Chairman Dave Whelan confirmed he has allowed his assistant manager to talk to the Swans about the vacancy at the Liberty Stadium.

"We got him from Swansea so it's only fair we let Swansea speak to him if they want to," said Whelan.

Jones, 42, was targeted by Swansea in 2010 before Rodgers was appointed.

"We don't want to lose the lad, he's a good lad," said Whelan. "But you can't stand in their way if they want to progress."

The Swans agreed a £7m compensation deal with Liverpool to release Rodgers from his contract, and for first-team coach Colin Pascoe, match analyst Chris Davies and conditioning expert Glen Driscoll.

Jenkins as vowed to move quickly to find a successor to Rodgers.

Managers in Spain and the Netherlands have come under consideration, while Brighton's Gus Poyet, Blackpool's Ian Holloway, Birmingham's Chris Hughton and former Denmark international Michael Laudrup have joined Jones in the running for the vacancy.

Jones spent a successful spell with Swansea from 2007 to 2009 as an assistant manager under Roberto Martinez.

The former striker was a popular figure around the Liberty Stadium and was understood to have turned down the chance to succeed Martinez before opting to follow the Spaniard to Wigan.

During his time in south Wales, Jones won the League One title in 2008 and flirted with the play-offs the following season in the Championship.

Martinez was linked heavily with the Liverpool before they opted for Rodgers. He also held talks with Aston Villa but has now pledged his future to Wigan, according to Whelan.