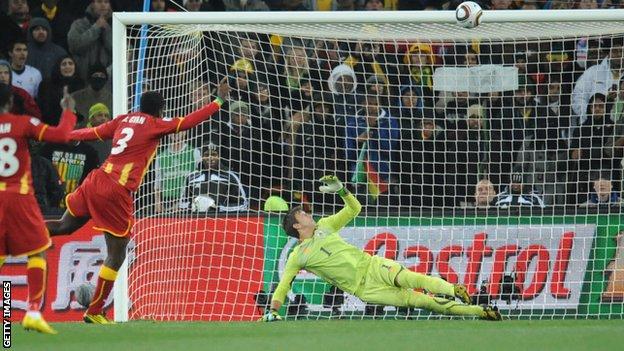 Ghana have put their faith in unproven striker Dominic Adiyiah for their opening 2014 World Cup qualifier against Lesotho on Friday.

AC Milan's Adiyiah has had little game time this season on loan in Turkey and Ukraine but will fill the gap left by Asamoah Gyan's self-imposed exile.

Ghana host Lesotho at 1700 GMT in Group D on Friday, the first of 20 ties in four African groups this weekend.

Group G kicks off an hour later when Egypt play Mozambique in Alexandria.

Ghana's match in Kumasi will their first competitive fixture under new coach Kwesi Appiah, and they were forced into finding a replacement for Gyan following his decision to take an indefinite break from international football.

The Sunderland striker suffered huge personal disappointment at the last two international tournaments he played in.

In 2010, he had the chance to send an African team into the World Cup semi-finals for the first time but missed a late penalty against Uruguay and two years later his spot-kick was saved in the Africa Cup of Nations defeat by Zambia.

His misery was compounded when he became for a target Ghana fans.

Adiyiah will hope for better treatment from Black Stars supporters as he attempts to play his way into form following an unsuccessful season.

The 22-year-old was sent by Italian giants AC Milan first to Karşıyaka S.K but failed to get into the team at the Turkish second-tier club and was moved on to Arsenal Kyiv.

Having helped Ghana win the the U-20 World Cup in 2009 with eight goals, and been named the Most Valuable Player of the tournament, Adiyiah was expected to go on to great things but has not yet fulfilled his promise.

Ghana will also be without influential winger Andre 'Dede' Ayew, who shone at the 2010 World Cup in South Africa. He misses the game with a shoulder injury.

After many decades of failure, four-time African champions Ghana have qualified for the last two World Cups - reaching the second round on both occasions.

Sudan and African champions Zambia are the other teams in Group D.

Egypt's match with Mozambique will be played in Alexandria without any fans in attendance, following the stadium disaster that left over 70 fans dead in Port Said in February.

League football has been banned in Egypt since the tragedy and the continental club games played by Al Ahly and Zamalek have taken place behind closed doors.

Egypt have not qualified for the Word Cup since 1990 and will be playing their first competitive match under American coach Bob Bradley, who led the United States at the World Cup two years ago.

The Pharaohs are desperate to reach a competition that has eluded them in recent times.

Despite winning three consecutive Africa Cup of Nations titles between 2006-2010, Egypt could not translate continental supremacy into a World Cup qualification.

In late 2009, they lost a fiercely contested play-off to North African rivals Algeria as both teams sought to take the 32nd and last World Cup berth available.

Group G is made up by Guinea and Zimbabwe, with both sides searching for a maiden World Cup appearance.