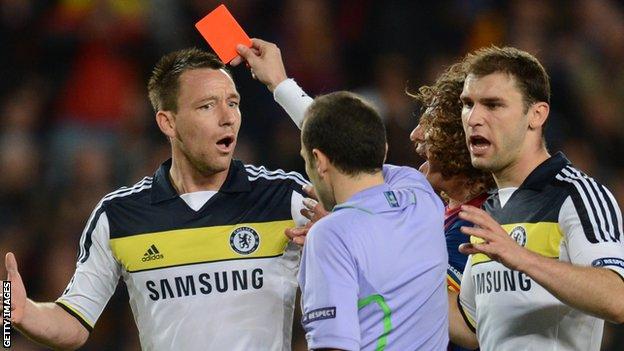 Chelsea defender John Terry will miss the first two games of next season's European campaign after receiving a three-match ban from Uefa.

He has already missed the final victory over Bayern Munich following his red card in the semi-final with Barcelona.

But Uefa has now decided to add two more games to his punishment.

He is out of the Super Cup match against Europa League winners Atletico Madrid in August, as well as Chelsea's first Champions League group game.

Terry and Chelsea have three days to decide whether to appeal against the decision.

Terry, 31, was sent off for violent conduct after driving a knee into Barca's Alexis Sanchez off the ball, with Chelsea trailing 1-0 on the night.

He apologised for the red card saying he had "let his team-mates down".

The sending off did not affect the end result as Chelsea battled against the odds to reach the final with a 2-2 draw at the Nou Camp and 3-2 win on aggregate.

They then went on to win the competition for the first time, despite missing the suspended quartet of Terry, Ramires, Branislav Ivanovic and Raul Meireles.