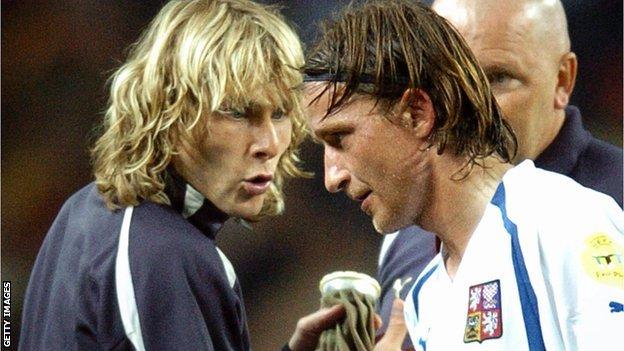 Just as in 1996, he is the fulcrum of an unheralded Czech Republic side regarded as rank outsiders to win the European Championship.

Sixteen years ago, Smicer was a skilful attacking midfielder who helped the Czechs take Euro '96 by storm.

They beat Italy, Portugal and France, eventually losing to Germany on a golden goal in the final of the first tournament they had entered following the separation of Czechoslovakia.

Best moment: Vital goals in two European Championships, first a late equaliser against Russia in 1996 and then the winner against the Netherlands in 2004

He is one of only four players to score in three Euro tournaments, also netting against Denmark in 2000

Club honours: While with Liverpool, who he supported as a boy, he won the FA Cup, League Cup and Uefa Cup in 2001, adding the Champions League in 2005 in his last match for the club

Now, as a forward-thinking general manager of the national team, he is hoping for another sudden explosion of talent similar to the one which helped propel him and his country to the finals of four more major tournaments in the following 12 years, including another near-miss at Euro 2004 when they lost to Greece in the semi-finals.

But seeing his side emerge as the surprise package in Poland and Ukraine is something the former Liverpool star admits is a big ask, even though they find themselves in an open group containing the Poles, Russia and the Greeks.

Up until the recent past, the Czechs would have been heavy favourites to progress but they are in the middle of a rebuilding process which began when they failed to make the 2010 World Cup and saw a host of stars retire.

Household names like Petr Cech, Tomas Rosicky and a horrifically out-of-form Milan Baros are still on board but the likes of Smicer, Pavel Nedved, Marek Jankulovski, Karel Poborsky and Jan Koller are long gone, leaving some big boots to fill, particularly in the case of 6ft 7.5in striker Koller.

The problem has been finding players of sufficient quality to follow in their footsteps, despite a revamped national coaching programme which has brought success at various youth levels.

"We were very happy to qualify for Euro 2012 because we are in the situation where our golden generation is finished now," Smicer told BBC Sport from his side's pre-tournament training base in Graz, Austria.

"We have had some talented players at Under-21, Under-19 and Under-18 levels in recent years. They are achieving some good results and reaching tournament finals, but we have a little problem in that they are not making the next step.

Our young players are moving abroad too early and they are not playing regularly, so they are stagnating and not developing

"Two years ago we had a really good Under-21 team. Now, all those players are 23 and 24 and hardly anyone from this very good team is in our national squad today.

"Marek Suchy and Tomas Necid are here, but only those two. It should be five or six, and we expected more.

"I have strong views on why this is happening - it is because our young players are moving abroad too early and they are not playing regularly, so they are stagnating and not developing."

That has left a talent gap between players such as Cech, Rosicky and Baros and the likes of defender Theodor Gebre Selassi, who is highly-rated but raw at this level.

"We still have a few experienced players and we need them to be performing well because, without them, it is going to be a tough challenge at Euro 2012 for the younger players like Theodor," Smicer added.

"Our target is to reach the quarter-finals, but we are not thinking about anything more than that."

Such a cautious approach is understandable. The Czechs found it tough enough to get through qualifying, with head coach Michael Bilek almost losing his job in the middle of a stuttering campaign that needed a controversial penalty against Scotland to secure second place in their group, and ended with a play-off win over Montenegro.

There is still reason for optimism, however. The new wave of young talent may not have materialised yet but a different crop of players did come to the fore to carry their hopes along with Cech and co.

Of the eight players from Czech clubs in Bilek's squad, six play for 2011 champions Viktoria Plzen and were part of their surprise progress through three rounds of Champions League qualifying last season.

They ended up in the same group as Barcelona and AC Milan, where they took a point off the Italian giants, performed valiantly in defeat at the Nou Camp and eventually finished third.

Those displays brought that contingent belated international recognition and they contributed to a much-needed improvement from the Czechs in the latter stages of qualifying, particularly Petr Jiracek (who has since joined Wolfsburg) and Vaclav Pilar, who both scored in the 3-0 aggregate win over Montenegro that took them to Euro 2012.

"The Plzen players may not play in the strongest league but they showed in the Champions League that they can compete with the best teams, and then they brought their club form with them into the national team," said Smicer.

"They have some talent and they are hungry, which is very important. You need experience but you need freshness and hunger too, to push the older players - and they give us that balance."

Are there echoes of the spirit of '96, when there were 15 home-based players in the Czech squad? Smicer certainly hopes so.

"We were also not big-name players but we had all had very good seasons," recalled Smicer, who had joined French club Lens just before the tournament began.

"Pavel Nedved was playing well for Sparta Prague and myself and Radek Bejbl reached the semi-finals of the Uefa Cup with Slavia Prague, which was a really big success for a Czech team. We were also national champions.

"But we were still a little bit underestimated by the other teams and in our mind it was a case of 'come on, let's show them that we are good players too'.

"That was our only target, we were not thinking about anything else when we arrived in England."

A similar attitude could yet lead to more success in Poland and Ukraine too.