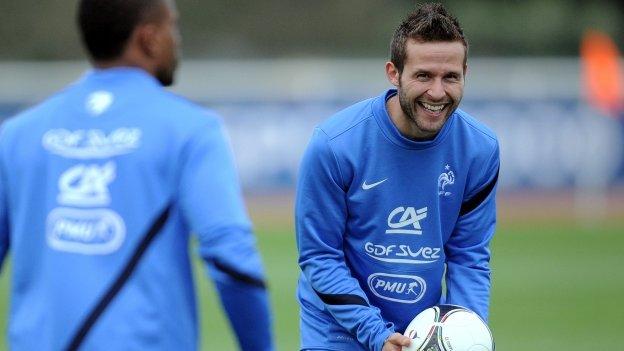 France coach Laurent Blanc is the key reason behind his team's resurgence since their awful showing at the 2010 World Cup, according to Yohan Cabaye.

Blanc took charge of the dispirited national team after that tournament and helped them finish top of their Euro 2012 qualifying group.

"He made us forget the last World Cup, which was a complete failure," the Newcastle player, 26, told BBC Sport.

"He has instilled a group mentality and team spirit like you find in a club."

France were managed by Raymond Domenech at the 2010 World Cup but Les Bleus were blighted by internal problems and lost two of their three group games, drawing the other.

Nicolas Anelka was sent home from the squad during the tournament following reports of an angry exchange of words with Domenech.

This was followed by a revolt by some players, who showed their support for Anelka by refusing to train. Manchester United full-back Patrice Evra, who led the mutiny, was stripped of his captaincy and did not play in the final group game against South Africa.

Evra was handed a six-match suspension, but has been included in a largely new-look France squad which opens its Euro 2012 campaign against rivals England on Monday 11 June.

"You can see the change on the pitch," added Cabaye.

"We have been winning matches and qualified directly for the Euros. Now the greater challenge is to perform well during the competition and to go as far as possible. It is important to do ourselves justice and be positive."

France, who are unbeaten in 21 games, go into their opening match against Group D opponents England as favourites with most bookmakers.

But Cabaye said he was unsure as to whether the two-time tournament winners are worthy of that tag.

"When we beat England at Wembley [2010] we were missing some players. But we won so we have a small psychological advantage," continued the former Lille player.

"However, it was only a friendly. This is going to be a competitive game, so it is different. It is the first match and it is going to be very important. I hope we are going to play well and beat them, but I don't know if we are better than them."