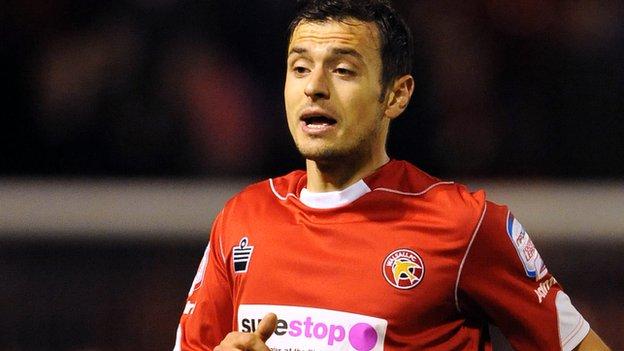 The 24-year-old will officially move to Sixfields on a two-year deal from 1 July, after his contract with the Saddlers expires.

He scored eight goals in 52 appearances for Walsall in 2011/12 and becomes Aidy Boothroyd's second summer signing after Clive Platt joined from Coventry.

"There were a lot of clubs in for him and I'm delighted we've got him," Boothroyd said.

"He's a striker who also plays wide right or wide left and what we've got with Alex is a really young talented player with lots of potential.

"He's really ambitious and I'm really excited about working with him."

Nicholls, who made 191 league appearances for the Bescot Stadium side, was offered a new deal by the club after helping them maintain their League One status this season.

But the attacker chose not to take up the offer and will now drop down a division with the Cobblers.

Boothroyd denies that Nicholls and striker Clive Platt are signing as replacements for Michael Jacobs, who is considering a contract offer, and Adebayo Akinfenwa, whose future is also uncertain.

"What I see is competition for places," Boothroyd told BBC Northampton. "Anybody that comes back, that thinks they can walk into the team, those days are over now.

"Alex is not a replacement for anybody. We're more concerned with getting people in than getting them out.

"I'd like to keep Michael, and until a club comes up with the money, then he is going to stay. So far, we're nowhere near that figure.

Nicholls is a nippy forward/winger likely to be buzzing off target-man Platt which begs the question where does last season's top-scorer Adebayo Akinfenwa fit into all of this?

"I don't want Adebayo to go. I expect people to be making calls about him but whether or not we sell him will depend on what comes in."

"I expect us to be coming back [to pre-season training] in great condition, particularly when the boys see who we've signed and who we're going to be signing.

"I do expect to have another two or three players in the building for pre-season training in July. We don't have a recognised left-back at the club so that's a situation I need to sort out.

"I'm going to get players in that can play in number of positions, which is what Alex Nicholls is, really.

"I want to make a statement to the players and everybody that we don't want to be in the turmoil we had last year."

The Cobblers are also still waiting on decisions on contract offers to Clarke Carlisle and Neal Kitson.

"There will come a time when I decide to move on. I'm not quite there but I'm not too far off."